Home All News Heroes Sick of Banks? Man Opens His Own: The Wild Success of “Bank... 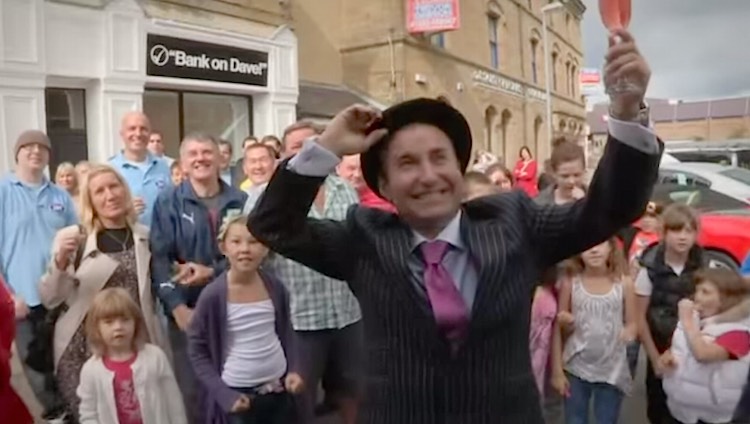 What could a man do if the entire banking industry suddenly made it impossible for him to continue doing business because they stopped giving loans to his customers? David Fishwick, a short, balding powder-keg of a man, decided he would simply create his own bank — the “Bank of Dave.” It was an instant success, with hundreds of people in Burnley, England lining up down the block to give him $1.8 million worth of business the first day. But it took a lot of scrappy fighting to get there.

Railing against the big banks, Fishwick’s public rants – sometimes profane, always amusing – led to his own Channel 4 TV series called, “Bank of Dave.” The series followed his frustrating efforts to open a community bank in his hometown, 200 miles north of London. The show made fun of the rules and regulators in the UK– and made Dave into a national hero.

Though Fishwick cusses like a sailor, he exudes movie star charisma and can instantly sum up populist anger over banks and their tight-fisted policies.

“[Bankers] gambled away billions of pounds of our money and we bailed them out with billions more,” Fishwick told the Daily Mail. “And they still pay themselves obscene bonuses and refuse to lend money to businesses fighting for their lives. It’s disgusting.” 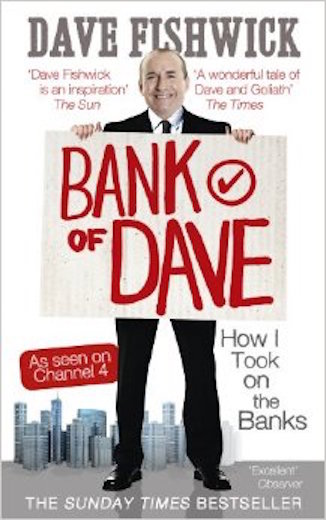 By selling minibuses, Dave became a self-made millionaire before his 30th birthday. Happy to run his small business, Fishwick never set out to become a banker or a celebrity. But that all changed when the recession hit in 2008.

His customers couldn’t get loans to buy his buses because big banks were sitting on their money, afraid to take the risk of offering loans. It made no sense to Fishwick, who knew his customers and knew they would make good on their debt. The banks were essentially damaging his business, so he thought, ‘Why don’t I just lend the money myself.’

When he tried to get a banking license, regulators told Fishwick he didn’t have the right education, or even the right parentage, to qualify, and said he would go to prison if he used the words “bank” or “deposit” in his business plan. A ‘Dave and Goliath’ showdown was in the making. 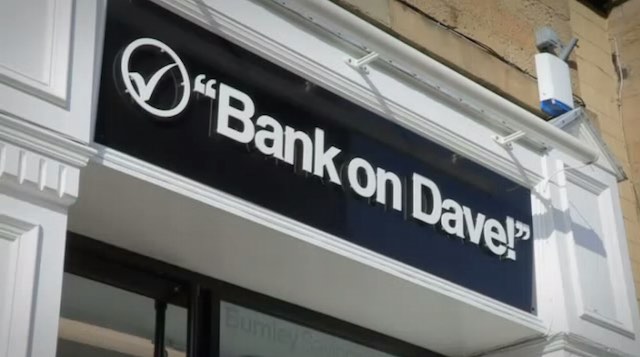 By challenging the policies and layers of red tape, Fishwick’s crusade finally led to changes in banking regulations. He was allowed to set up Burnley Savings and Loans in 2011 and he cheekily avoided prison for his use of the word ‘bank’ by using it as an advertising slogan, “You can Bank on Dave.”

One-upping the English financial institutions in almost every way, his S&L pays 5% return on savings accounts. He offers lower interest rates on loans–– from 8.9% to 14.9%, instead of the typical 17.4% to 29%. Most definitely, he doesn’t pay himself bonuses. In fact, all profits from his Savings and Loan go to charity.

Politicians are finally coming around to Dave’s way of thinking. In Parliament, MP Steve Baker told RT News, “In his comical, kind of crazy way he is showing the way to a better banking system, which is responsible, local and in touch with entrepreneurship — which could actually be the basis for going forwards.”

Thanks to Fishwick, it is now easier for such community institutions to crop up in other towns and cities around the UK. Nearly seven years after he launched his bid to open a bank, he’s been told he’ll actually receive his license sometime later this year. Then, maybe he’ll change the name to simply, “Bank of Dave.”

Yet, he is not done crusading on behalf of the little guy. He’s now going after predatory lenders and pay-day loans in a new TV series, “Loan Ranger” and he’s working on yet another series with Channel 4 that will focus on property law in the UK.

Back in the 1970s, comedian Steve Martin joked that if you’re going to start a bank, “You’ve got to give it the right name. It’s gotta be something big and strong like ‘Security First Trust and Federal Reserve’ … because nobody’s gonna put their money in ‘Fred’s Bank.’”

But in the UK, people fed up with High Street bankers now have good reasons to be confident in a bank simply called, Dave’s.

(WATCH an RT news report, and Dave’s own clip below) / Story tip from Men In Blazers