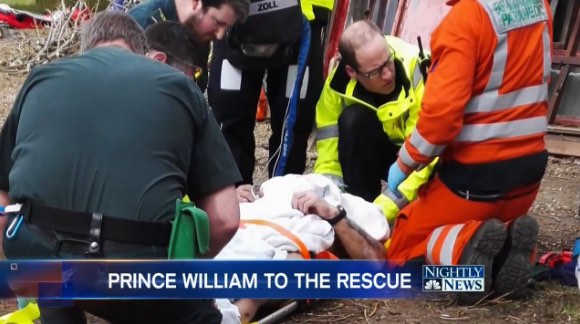 It’s not every day that a future king swoops in by helicopter to rescue you.

That is what Prince William did for Jim Schembri, but he was almost too drugged to notice.

The 37-year-old arborist was injured when a branch collapsed and he fell out of the tree, dislocating his hip and shoulder.

William, second in line for the British throne, held Schembri’s head at the scene for 30 minutes and stayed with him even longer at the emergency room on March 22.

The Prince made history last year when he became the first member of the Royal Family in direct succession to the throne to take a civilian job—as an air ambulance pilot—working four days on, four days off, to balance work, family and royal obligations.

He donates his salary to charity.

(WATCH the video from ABC News)