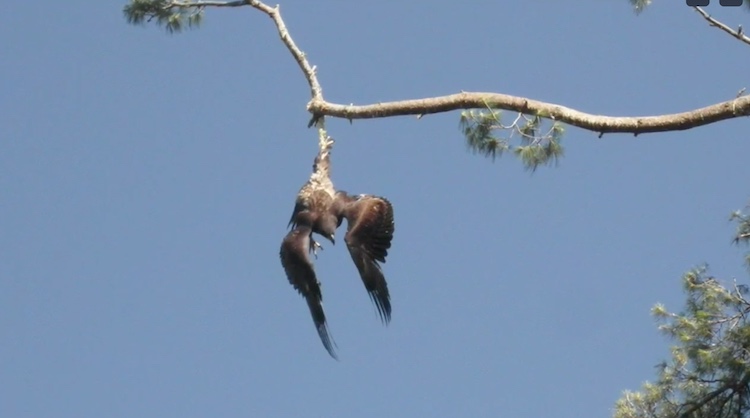 An Army veteran used his battlefield skills to save the life of America’s national bird—a bald eagle—and, just in time for the most patriotic holiday, July 4th.

Jason Galvin used a rifle to shoot through a rope, freeing the eagle that had been trapped in a treetop for at least two days.


Galvin was on a fishing trip when he came upon a group of people watching the eagle, tangled in a rope and dangling from the top of a tree. They had called the local fire department and the Minnesota Department of Natural Resources (DNR), but the eagle — at 75 feet off the ground — was too high to reach.

That’s when Galvin, half-joking, suggested he try to shoot through the rope. After explaining his marksmanship skills, and demonstrating them, DNR Officer Phil Mohs decided it was worth a try.

CHECK OUT: Gorillas Spring into Action to Dismantle Poacher’s Traps

Galvin spent an hour-and-a-half slowly squeezing off shot after shot – each time, waiting for the wind to die down, the branches to stop swaying, and making sure his aim just right to avoid hurting the bird.

He fired off 150 rounds, and clipped through three tree branches, but he finally severed the rope.

The exhausted eagle fell to the ground where Mohs scooped it up and took it to a raptor center for recovery and rehabilitation. A day later, the eagle was eating and on its way to a full recovery.

Galvin named the bird “Freedom” and says he’s glad to have been able to help the animal so close to Independence Day.

“It’s the Fourth of July. That’s our bird. I can’t let it sit there,” Galvin told KARE News. “When it finally came down, it was breathtaking. It was a beautiful moment.”

(WATCH the video below from KARE News) – Photos via Facebook