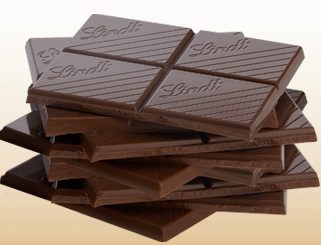 Instead of reaching for cookies or cake when stressed out, you might want some dark chocolate instead. New research from Australia has found that the polyphenols in dark chocolate increase calmness and contentedness.

Polyphenols are found naturally in plants and are a basic component of the human diet. These compounds have been shown to reduce oxidative stress which is associated with many diseases. They may also have beneficial psychological effects.

“Anecdotally, chocolate is often linked to mood enhancement,” said Matthew Pase of Swinburne University of Technology, the lead author of the study.

“This clinical trial is perhaps the first to scientifically demonstrate the positive effects of cocoa polyphenols on mood.”

Participants drank their assigned drink once a day for 30 days. After 30 days, those who drank the high dose concentration of cocoa polyphenols reported greater calmness and contentedness than those who drank either of the other drink mixes.

Only those who consumed the highest amount of polyphenols (500 mg per day) reported the positive effects.

The research is published in the May 2013 issue of the Journal of Psychopharmacology.