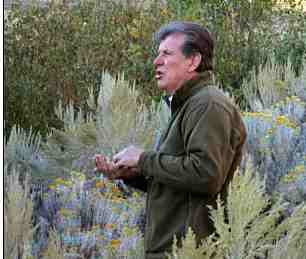 A year after the devastation from Idaho’s worst wildfire, Governor Otter has drummed up support for a statewide, citizen-led volunteer effort to rehabilitate torched lands by replanting it with millions of sagebrush seeds, a plant critical to the local habitat, which will provide shelter and food for wildlife while preventing erosion.

“You literally had jack rabbits that were catching on fire. That’s how fast this thing was moving,” said Jon Hanian, a spokesman for Gov. C.L. “Butch” Otter (R).

The Murphy Complex blaze, as it became known, burned nearly 700,000 acres across the Gem State — an area just shy of the size of Rhode Island and double what has burned in southern California so far this week. Hundreds of animals perished, from deer to horses to speedy jack rabbits. When Hanian accompanied Otter on a 40-minute helicopter flight over the site of the inferno, all they could see from the sky was blackened earth, Hanian recalls.

“I think it’s hard for most people, especially those who aren’t familiar with the wide open spaces out here in the West, to get an idea of how big an area we’re talking about,” he said.

In response to the devastation, Otter this month has drummed up support for a statewide, citizen-led volunteer effort to rehabilitate all that torched land by replanting it with millions of sagebrush seeds. The greenish shrub is native to rangeland in Great Basin states such as Idaho, Utah, Wyoming and Nevada, where it’s the official state flower.

Sagebrush is a critical component of the local habitat, environmentalists say. The plant provides shelter for small and large creatures, food for animals including sage grouse, pronghorn and deer, and prevents erosion, according to the state Department of Fish and Game. This year’s fires in Idaho have burned more than 2 million total acres and created a huge need for the shrub.

A shortage of commercially available seed has compounded the problem. While Idaho and the federal Bureau of Land Management already have bought millions of sagebrush seeds for the replanting effort, there isn’t enough to go around. Many of the areas where the seed is harvested commercially also went up in flames last summer.

To address the shortage, Otter and the Idaho Department of Fish and Game have launched a publicity campaign to recruit as many Idahoans as possible — from prisoners to hunters to school kids, up to and including the governor himself — to collect the seed, starting in November, so wildlife officials can begin to replant some of the state’s charred land next spring.

The message to Idahoans is simple: The state wants you!

“We’re trying to get everyone who enjoys the outdoors or is interested in preserving it to help us in this effort,” Hanian said in a telephone interview with Stateline.org. The state welcomes “off-roaders, mountain bikers, hunters, falconers — it doesn’t matter,” he said.

That includes Otter, a rancher who earlier this month posed with a hopper — essentially a large canvas bag into which seed is deposited — for a photo op to show potential volunteers how it’s done.

Specifically, volunteers will strip the seeds — which are about the size of pin heads — from the sagebrush by hand. The seeds then will travel to a nursery, where they will be dried and cleaned. Finally, they will be spread across burned areas by helicopter or plane early next year.

In name and more, the call to action echoes another grassroots initiative that took hold in Idaho and other western states during the 1970s and 1980s — the Sagebrush Rebellion, when residents banded together to demand more local control over the vast tracts of federally owned land that dominate the West. Otter, too, has embraced the tradition: In July, the first-term governor lambasted the federal government for complicating efforts to battle the Murphy Complex blaze.

This time, however, the focus of the locals’ efforts isn’t on the federal government but on a much more unpredictable and, many would argue, unforgiving entity — Mother Nature.

Wildfires hit Idaho worse than any other state this year, when 8.2 million acres have burned nationally, according to the National Interagency Fire Center, which coordinates firefighting efforts from its base in Boise. California’s scattered fires this week burned about 335,000 acres as of Tuesday (Oct. 23), according to the center.

Stifling heat, drought conditions and frequent thunderstorms — combined with the encroachment of cheatgrass, a highly flammable invasive weed — resulted in catastrophic blazes such as the Murphy Complex fire last summer and have wreaked havoc on sagebrush territory.

Indeed, cheatgrass caused such a problem that Otter and the governors of three of the other states where sagebrush is common — Nevada, Utah and Wyoming — “declared war” on the foreign invader during a wildfire summit Aug. 6 in Boise. (See related story: States, feds try to keep up with wildfires)

A diverse cross-section of Idahoans already is preparing to try to meet Otter’s call to duty.

Inmates at the Idaho State Correctional Institution south of Boise are building or repairing 80 hoppers to accommodate the expected influx of volunteers, according to the state Department of Correction. There’s a chance some of the prisoners could help collect the seed too, said Jeff Ray, a spokesman with the department.

State representatives have visited Indian reservations and trained residents how to collect the seed, which the Department of Fish and Game will purchase, according to Mary Dudley, the department’s volunteer coordinator.

High schools in Boise, meanwhile, are in a competition to see who can collect the most seed — even letting hundreds of students out of class to do so, said Darin Zarbnisky, an environmental science teacher at Borah High School.

Zarbnisky has joined forces with Dudley to collect sagebrush seed every year since 1989 — though never, he said, on such a grand scale. (Stateline.org)