Home All News Reviews Diving Into a New Smithsonian Era 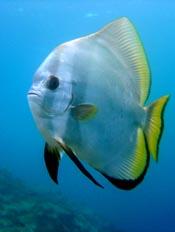 The new Ocean Hall at the Smithsonian Museum of Natural History opened Saturday, the largest renovation in the museum’s century-long history and a transformation of its largest exhibition space.

This latest Smithsonian offering in Washington, D.C. is dedicated to 71 percent of the Earth’s surface, it’s history and its importance in contemporary society. In addition to marine-life specimens and models, the new hall features eight high-definition video screens towering along the ceiling to submerge the visitors in an underwater panorama.

Complementing these features is a set of continuously running high-definition videos, “Ocean Odyssey,” created for this exhibition by underwater cinematographer Feodor Pitcairn. The video footage was shot in high definition, and will be shown across the high-bay walls of the Sant Ocean Hall using projectors.

“The ocean is a great and vast natural resource that’s critical to our existence,” said Elizabeth Duggal, associate director of the National Museum of Natural History. “Our goal is for the millions of people who will visit this hall to gain a new understanding of the essential role oceans play in sustaining life on earth. The Sony projection systems will help to bring the exhibit, and the oceans, to life at an extremely high level of quality and resolution.” 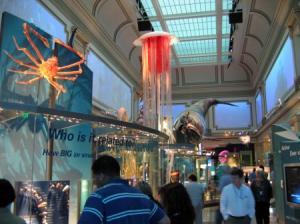 The projectors are installed in specially designed housings above the exhibit floor, and use carefully placed mirrors to “bounce” the images onto the projection areas, which are actually sections of the exhibit walls.

The Sant Ocean Hall is named for Roger and Vicki Sant, Washington philanthropists and Smithsonian supporters, who donated $15 million to support the new hall and related programs and outreach activities and created in partnership with the National Oceanic and Atmospheric Administration.

Check out the galleries at the Sant Ocean Hall online.