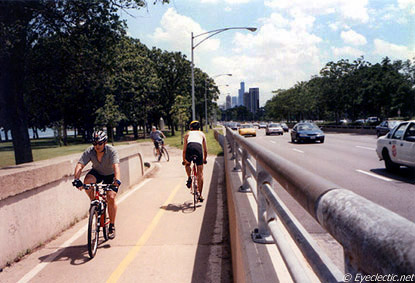 Chicago has unveiled its new Bike 2015 Plan, designed to achieve the mayor’s goal to make the Windy City the most bicycle-friendly city in the United States. Work has already begun on 75 of the planâ€™s 150 strategies, including Constructing 10 miles of new bikeways in 2006, to help reach the planâ€™s goal of a 500-mile bikeway network by 2015…

The Plan’s Strategies Include:

Rob Sadowsky, the Chicagoland Bicycle Federationâ€™s Executive Director, added, â€œThe plan covers everything we hoped for: from new exciting active living programs such as Sunday Parkways to specific facilities that will make bicycling in Chicago safer and more enjoyable. The Chicagoland Bicycle Federation applauds the City of Chicago on what we see as the most ambitious bike plan in the United States.â€

A copy of the plan is here.