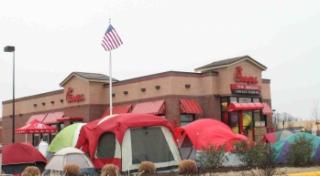 100 people began lining up in the cold, 24 hours before a new Chick-fil-A opened its doors, to win a year’s supply of weekly free chicken dinners. The Virginia customers were greeted by the earnest Chick-fil-A CEO as they entered the restaurant following a festive night of partying and sleeping in tents as elite members of the “First 100” club.

Read reporter Dan Zak’s account of the generous chicken company and its loyal fan base here, in the Washington Post.

“Spend 24 hours at a Chick-fil-A opening and witness the teeny ironies of human economics: how people skip work and burn gasoline traveling hundreds of miles for coupons and how a company thrives in a marketplace meltdown by treating its customers like royalty…”