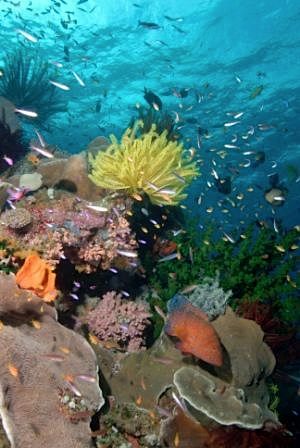 Pushed by a chorus of 486,900 citizens, the Australian government announced Thursday their intention to create the world’s largest marine reserve, a highly protected zone in the Coral Sea stretching almost 200,000 square miles — a historic moment for ocean conservation in Australia and globally.

Australia’s Coral Sea, east of the Great Barrier Reef, is one of the last remaining intact tropical ocean ecosystems in the world where populations of large ocean predators – sharks, tunas, and marlin – have not been severely reduced. The waters are home to healthy coral reefs, atolls, cays, and islands that provide shelter to reef fish, sea turtles, and seabirds.

Equivalent in size to Spain, the Coral Sea marine national park will be safeguarded from all extractive activity, including mining, oil and gas development, and fishing. In addition, its creation will ensure the protection of more than a third of its namesake fragile coral reefs.

“The government’s intention to protect the entire Coral Sea from mining (including petroleum exploration and development) and almost all of it from trawling will help secure the future of one of the world’s most important tropical seas”, said Ms Zethoven of the Pew Environment Group.

Each coral reef in this remote ocean region is exceptionally distinctive. Hundreds of globally threatened corals and other marine animals are known to live there. Many species occur nowhere else in the world.

Almost a half million people called for strong protection of the Coral Sea, which is believed to be the highest level of public support ever received by the Australian government for an environmental issue.

The Pew Environment Group supports the stance that a marine national park must be accompanied by a financial assistance package for affected fishing operators.

The proposed Coral Sea Marine Reserve was announced today as part of a national network of marine reserves put forward by the Commonwealth government. Whilst some important areas have not received protection, overall the proposed system of zoning is a significant step forward for marine conservation in Australia and globally.

“As governments gather this week in Rio de Janeiro for the U.N. Conference on Sustainable Development, Australia has made it clear that ocean conservation and management are critical to the world’s economic prosperity and environmental health”, said Imogen Zethoven of the Pew Environment Group.