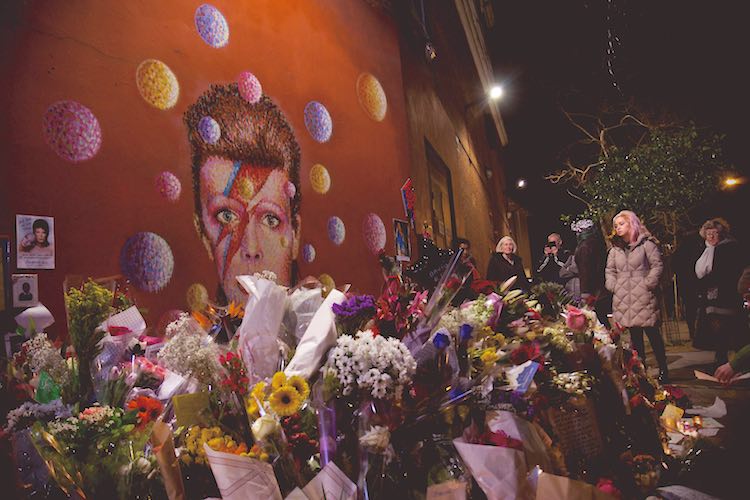 David Bowie, always reinventing and changing the face of modern music with showmanship and innovation, would be proud of the innovative ways his fans are remembering him, since his passing Sunday at the age of 69.

Of course, astronaut Chris Hadfield’s memorable version of “Space Oddity” recorded aboard the International Space Station in 2013 has been making the rounds on social media again, but Bowie’s iconic music has also being played from a church’s bell tower in Denmark, echoing down the streets of his boyhood home.

The carillon at the 634-year-old Dom Tower in Utrecht rang out with “Space Oddity” and “China Girl” on Monday.

DON’T MISS A BEAT, GET OUR GOOD NEWS APP—>  Download FREE for Android and iOS

And in London, thousands of fans flocked to the Brixton area where Bowie grew up. People gathered around the local mural (pictured, top) which has become an impromptu memorial piled high with flowers.

As fireworks lit up the sky, a marquee proclaimed, “David Bowie, Our Brixton Boy, RIP.” Music blared from speakers during a celebration of the singer’s life, until an electrical problem caused them to fall silent.

Undaunted, the crowd belted out their own acoustic version of “Starman.”

Check out the video below from The Independent… (Photo: Marcin Cajzer, CC)