Home This Day In History Good News in History, June 1

50 years ago today, John and Yoko recorded Give Peace a Chance, Lennon’s first solo single, while in a bed surrounded by celebrities and the press in Montreal, Canada.
The song was written in Room 1742 of the Queen Elizabeth Hotel during their famous “Bed-In For Peace”, when a reporter asked what he was trying to achieve by staying in bed. Lennon answered spontaneously “All we are saying is, give peace a chance”. He liked the phrase and set it to music, singing the song several times during the week-long bed-in.

Finally, on June 1st, they rented an 8-track tape machine and recorded it while still in bed. The recording session (published under the name Plastic Ono Band) included Timothy Leary, Rabbi Abraham Feinberg, Petula Clark, Dick Gregory, Allen Ginsberg, Paul Williams, and Murray the K, some of whom are mentioned in the lyrics. Lennon and Tommy Smothers played acoustic guitars while everyone joined in on vocals for the chorus. WATCH the video… (1969)

Forever after, room 1742 in the Queen Elizabeth Hotel has been their most frequently requested room.

Acting since he was in junior high school, Freeman won an Academy Award for his role in Million Dollar Baby, and wide acclaim for performances in Driving Miss Daisy, The Shawshank Redemption, Glory, Unforgiven, Bruce Almighty, and The Dark Knight. Known for his distinctively smooth, deep voice, he got his first acting gig as a cast member in the 1970s children’s program The Electric Company. Today, Freeman is ranked the 3rd highest Hollywood box office star because his films earned over $4.316 billion in total gross receipts. (1937)

And on this day in 1967, The Beatles released Sgt. Pepper’s Lonely Hearts Club Band—widely regarded as one of the greatest albums of all time. 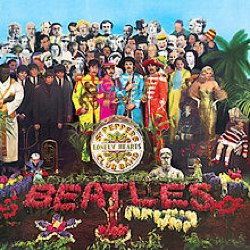 In the next four decades, it had sold more than 32 million copies worldwide, making it one of the best-selling LPs in history. Their eighth studio album, it was lauded for its innovations in music production, songwriting and graphic design; for pioneering the idea of a concept album; and for providing a musical representation of youth counterculture during the 1967 Summer of Love—it was #1 on the charts for the entire summer.

Knowing they would not need to perform the tracks live (having recently quit touring), The Fab Four pushed beyond the technological progression achieved with their 1966 album Revolver. They adopted an experimental approach to composition and recording on songs such as “With a Little Help from My Friends”, “Lucy in the Sky with Diamonds” and “A Day in the Life”.

Recorded over a 129-day period, producer George Martin and engineer Geoff Emerick’s innovative work on the album included the liberal application of sound shaping signal processing and the use of a 40-piece orchestra performing aleatoric crescendos. The album also incorporated a range of stylistic influences, including vaudeville, circus, avant-garde, and Western and Indian music, which offered sounds and textures not usually associated with popular music.

It was Paul’s idea to build the album around alter egos. Martin explains, “Paul said, ‘Why don’t we make the album as though the Pepper band really existed, as though Sergeant Pepper was making the record? We’ll dub in effects and things.’ I loved the idea, and from that moment on it was as though Pepper had a life of its own.”

Critics hailed it immediately as a cultural turning point that elevated pop music to the level of fine art. Richard Poirier wrote, “Listening to the Sgt. Pepper album one thinks not simply of the history of popular music but the history of this century.” Time magazine declared it “a historic departure in the progress of music – any music”. Newsweek called it a “masterpiece”, and The New York Times Book Review characterized it as a harbinger of a “golden Renaissance of Song”. It won four Grammy Awards, including Album of the Year–the first rock LP to receive the honor.

To mark the occasion, The Beatles released a Super Deluxe Edition 4-disk box set with extras, like 33 tracks from the Sgt. Pepper sessions that place you in the studio, a documentary DVD of The Making of Sgt. Pepper, including interviews with Paul, George and Ringo, and a 144-page hardback book.