Home This Day In History Good News in History, August 13

120 years ago today, the iconic film director Alfred Hitchcock was born in Leytonstone, Essex. Known as The Master of Suspense, he directed some of the most groundbreaking films of all time after he moved to America—including Psycho, Rear Window, North by Northwest, Vertigo, Dial M for Murder, and perhaps, most terrifying of all, The Birds. Arguably the most influential filmmaker of all time, he directed over 50 movies, and also hosted and produced the television anthology Alfred Hitchcock Presents (1955–1965). WATCH a short bio… (1899)

As a 20-year-old, Hitchcock entered the film industry, designing title cards, yet made his directorial debut at age 26. The Academy Award-winner’s “Hitchcockian style” includes the use of camera movement to mimic a person’s gaze, thereby turning viewers into voyeurs, and framing shots to maximize anxiety and fear.

And on this day in 1860, Annie Oakley, who became the first American woman “superstar,” was born in a cabin in rural Ohio. 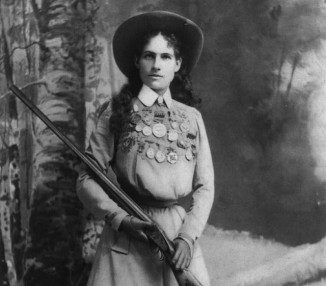 To support her five siblings and widowed mother, Phoebe Annie Mosey took up hunting and trapping at age eight. She sold the game until, at age 15, her skill eventually had paid off the mortgage on her mother’s farm. Annie competed against a traveling show marksman, Frank Butler, who bet $100 that he could beat any local fancy shooter. He was shocked when a five-foot-tall girl beat him, and the two married a year later. In 1885, the couple joined Buffalo Bill’s Wild West Show, where she earned more than any other performer on tour, except “Buffalo Bill” Cody himself. Her feats of marksmanship were so incredible she even performed for Queen Victoria. At 30 paces she could split a playing card held edge-on, she hit dimes tossed into the air, and cigarettes from her husband’s lips. Throughout her career, it is believed that Oakley taught upwards of 15,000 women how to use a gun–both for protection and as a form of physical and mental exercise. (Purchase books about Oakley.)

On this day in 2008, American swimmer Michael Phelps won the men’s 200m butterfly in Beijing, on his way to setting the record for most gold medals earned by an individual athlete in a single Olympics (8)—and setting a world record in every single event. The Baltimore kid who was diagnosed with severe ADHD, and medicated during the school week, proved his English teacher a fool for saying he would never be successful. The retired athlete has co-authored several books, including No Limits: The Will to Succeed, and a children’s book, How to Train with a T. Rex and Win 8 Gold Medals.