Home This Day In History Good News in History, September 4

65 years ago today, the first weekly meeting in favor of democratic reforms took place in East Germany, with peaceful political protestors gathering in Leipzig at the St. Nicholas Church to demand rights such as the freedom to travel to foreign countries and to elect a democratic government. After the church’s weekly Monday prayer for peace, a few hundred people gathered, a number that swelled to more than 70,000 (out of the city’s population of 500,000), five days later.

The next week, 120,000 demonstrators turned up—all united in peaceful opposition to the USSR-beholden regime and chanting “Wir sind das Volk!” (“We are the people!”) In one more week, the number more than doubled to 320,000, with East German military units again being deployed on stand-by in the vicinity. This pressure and other key events eventually led to the fall of the Berlin Wall two months later, marking the imminent end of the dictatorial regime. (1989)

The local Lutheran churches offered sanctuary to alternative political groups, and also offered them financial aid, support from the congregation and a place to communicate.

On this day in 1915, Rocky Mountain National Park was established by the US Congress, thanks to a man who was a sickly 14 year-old when he first moved near the majestic mountain and lakes, and later lobbied for their protection. 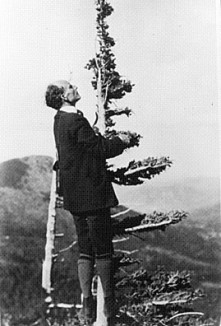 Enos Mills wrote many books and articles describing the region and later split his time between the mountains he loved and the cities of the eastern United States, where he fought for legislation to create the park. Mills Lake in 415 square-mile Rocky Mountain National Park is named in his honor.

And, on this day in 1781, Los Angeles was founded by Spanish settlers.

12 diverse working families settled in El Pueblo de la Reina de Los Angeles (The Town of the Queen of the Angels). Eight of the 23 adults arriving from the Mexican town of Álamos–held by Spain at the time–were Indians, ten were of African descent. They found a very spacious valley well grown with cottonwoods and alders, through which ran a beautiful river.

Happy 31st wedding anniversary to Kevin Bacon and Kyra Sedgwick, who have stayed married for 30 years, a feat that’s rarely been equaled in Hollywood. They got to know each other during the making of the PBS TV movie Lemon Sky. They had two children together and committed to keeping the marriage a top priority, by always scheduling quality time on date nights. (1988)

RELATED: SEE the Gag Gift Given to Bacon When he Turned 60 From his Mother-in-law