Home This Day In History Good News in History, January 6

82 years ago today, the cartoon character Pepé LePew first debuted in a Warner Bros cartoon (Odor-able Kitty). Created by Chuck Jones, the French skunk is always busy romantically pursuing a female black cat, whom he mistakes for a “skunk fatale”. Unbeknownst to LePew, the kitten has a white stripe painted down her back, usually by accident (squeezing under a fence with wet white paint). Pepé’s voice, provided by Mel Blanc, was based on the French actor Charles Boyer, but in the French version of the cartoon, LePew speaks with a heavy Italian accent—and uses the name Pépé le Putois. WATCH a clip and practice some French phrases… (1938)

On this day in 1941, in a speech to congress, U.S. President Franklin Roosevelt offered his vision of “The Four Freedoms” for which America would fight in World War II. The freedom of speech, the freedom of worship, the freedom from want, and the freedom from fear – together these brought hope in the coming years to a war-wearied people, particularly after one artist gave them a vision of what they were fighting for. 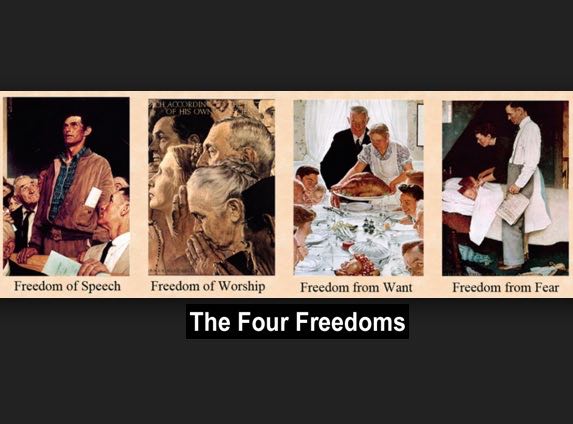 Two years later, that artist, Norman Rockwell, was inspired to paint images for each of FDR’s Four Freedoms. The prints toured the nation, helping to sell 133 million dollars in war bonds and stamps that paid for America’s war effort.

The iconic ideas enunciated in Roosevelt’s Four Freedoms were the principles that evolved into the Atlantic Charter declared by him and Winston Churchill in August 1941; and the foundation of an imagined international organization, which became the United Nations after FDR’s death; and the Universal Declaration of Human Rights adopted by the United Nations in 1948 through the work of his wife, Eleanor Roosevelt.

And on this day in 1929, a Catholic nun first arrived in Calcutta to work amongst India’s poorest and diseased people. She became Mother Teresa, renown for her charity, unselfishness, hard work, and a natural talent for organization. Before her death in 1997, she had established 4,000 sisters serving in 123 countries of the world and won a Nobel Peace Prize.