Home All News Heroes Habitat for Humanity Gets $100 Million Gift 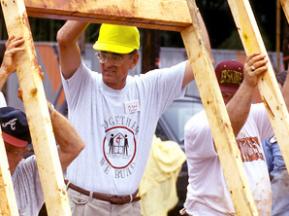 Habitat for Humanity has been given a $100 million gift from Atlanta developer J. Ronald Terwilliger, who said his work in the housing industry affords him an understanding of the struggle of poor people to find decent housing.

The nonprofit group announced Thursday it will be able to build 60,000 homes around the globe with the gift — the largest individual contribution in its history.

Mr. Terwilliger is a former chief executive of housing developer Trammell Crow Residential Co. and a longtime member of Habitat’s board of directors.

Habitat for Humanity International has helped more than 300,000 families move from deplorable housing into simple, decent homes they helped build and can afford to buy and live in.

It was founded in 1976 by Millard and Linda Fuller. By the organization’s 25th anniversary, tens of thousands of people were volunteering with Habitat and more than 500,000 people were living in Habitat homes.

Click to get involved in your locality, volunteer, and help build a home.