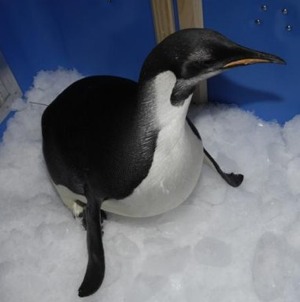 The wayward emperor penguin that was found on a New Zealand beach June 20, far from his Antarctic feeding grounds and moved to the zoo after he became ill from eating sand that he likely mistook for snow, has regained weight and is on his way back to the wild.

He is headed south aboard a New Zealand National Institute of Water and Atmospheric Research vessel. On the way, Happy Feet will be released from the ship, approximately four days out to sea, at about 51 degrees south – within the penguin’s natural habitat.

“It has been an amazing journey caring for him over the past nine weeks and we have been overwhelmed by the amazing level of interest and support from around New Zealand and the world,” Dr Lisa Argilla, Manager of Veterinary Science at Wellington Zoo told the media.

More than 1,700 people went to the zoo Sunday to bid goodbye to the 3-foot-tall penguin named Happy Feet, who was visible in a glassed area while getting final medical checks. The zoo raised about $28,000 in donations to cover the cost of his stay.

Happy Feet was only the second emperor penguin ever recorded reaching New Zealand.

The penguin has been fitted with a Sirtrack satellite tracker and a microchip and fans will be able to follow his progress on a new website: www.nzemperor.com. Each new position will be plotted on the map so all can follow his progress.

It is not known which direction Happy Feet will travel, but scientists hope he heads back to his home in the Antarctic.

“We are excited about this rare opportunity to learn about the movements of an amazing animal.”

(WATCH the AP video below, or read the story in The State)