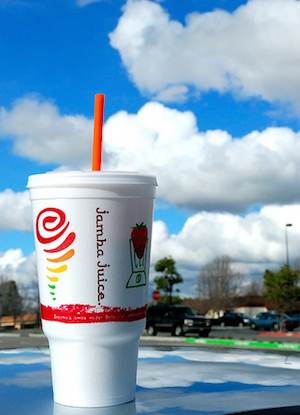 The California company Jamba Juice sells smoothies that are healthy and natural, but relies on an unnatural, unhealthy substance — styrofoam — for serving their drinks.

Ten-year-old Mia Hansen learned that styrofoam does not break down in our landfills and is harmful to the environment and animals, so she started a Change.org petition to get the nationwide chain to stop using it.

Mia’s petition collected more than 130,000 signatures — and the pressure worked.

Mia and her mom secured a public commitment from Jamba Juice to completely stop using Styrofoam cups and switch to an environmental alternative by the end of 2013.

The company already uses an alternative to foam in some cities, like Seattle, where it is banned, according to Mia’s petition. “If they do that there, they can do it everywhere!”

After her recent victory, the fifth grader wrote, “It made me feel like anyone of any age in any country can really make a difference in the world.”

Photo: el_finco/Flickr/cc – Thanks to Janine Boe for sending the link!