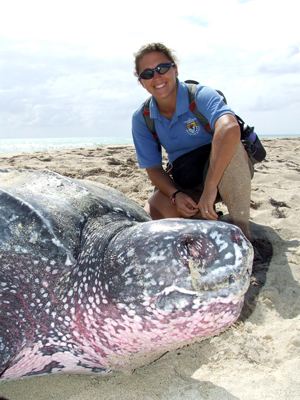 A major decision to protect feeding hotspots for endangered leatherback sea turtles off the shores of Washington, Oregon and California was finalized last week by the U.S. Marine Fisheries Service.

The final rule establishes protection for 40,000 square miles of critical ocean habitat in areas where leatherbacks feed on jellyfish after swimming 6,000 miles across the ocean from nests in Indonesia. This is the first permanent safe haven for the giant leatherbacks designated in continental U.S. waters and the largest area set aside to protect sea turtle habitat in the United States or its territories.

“Habitat protections are vital to the survival of these ancient animals as they make the longest, most epic journey of any creature on the planet to get to our West Coast every year,” said Catherine Kilduff with the Center for Biological Diversity.

The environmental group, which filed a legal petition for protection in 2007 along with Oceana and the Turtle Island Restoration Network, says the final rule overlooks the need to protect turtles’ migratory paths from commercial fishing, water pollution and marine vessel traffic, such as mile-long drift nets used for swordfish off California.

The critical habitat designation for leatherback feeding areas requires the US government to review any new wave energy, offshore drilling or coastal projects and prevent harm to the sea turtles or jellyfish. Species with critical habitat protected under the Endangered Species Act are twice as likely to recover as those without such protection.

The largest of all sea turtles, leatherbacks can grow up to nine feet long and weigh up to 2,000 pounds. Pacific leatherback sea 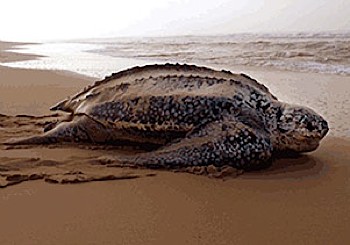 turtles have declined more than 95 percent since the 1980s; as few as 2,300 adult female western Pacific leatherbacks remain. The species dates from the time of the dinosaurs, having survived for 100 million years virtually unchanged.

The leatherback sea turtles feeding off the U.S. West Coast make the longest known migration of any reptile, across the Pacific Ocean where they nest on beaches in Papua, Indonesia. They make this great migration to feed on jellyfish in the productive ocean waters of the American Pacific. They are generally found off the West Coast in the summer and fall months.