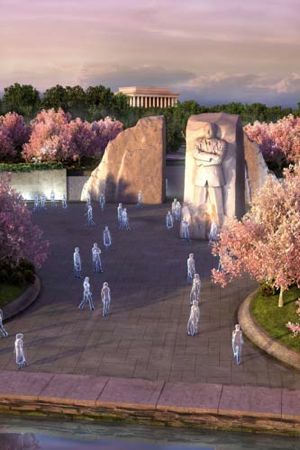 The first memorial on the National Mall in Washington, DC, dedicated to a non-president, or a black American, opens today in honor of Martin Luther King, Jr.

Standing between the Washington Monument, Lincoln Memorial, and Jefferson Memorial — alongside the water and the cherry trees — the granite statue stands more than 30 feet tall.

Another element of the memorial that truly captures Dr. King’s legacy is the Inscription Wall.

Fourteen of Dr. King’s most notable quotes are engraved on a 450-foot crescent shaped granite wall. The quotes span the too-short career of Dr. King, the earliest taken from his rise during the Montgomery Bus Boycotts in Alabama, 1955. The latest quote, appropriately, was taken from his last sermon delivered in Washington, DC at the National Cathedral in 1968, four days before his assassination at age 39.

The official dedication for the memorial takes place Sunday, August 28 on the 40th anniversary of King’s “I Have a Dream” speech. President Obama is scheduled to speak, and Aretha Franklin to sing, for the thousands who will flock to the nation’s capital.

Take a virtual tour of the four-acre site, and donate to help sponsor the project, at the MLK Memorial website: www.mlkmemorial.org.