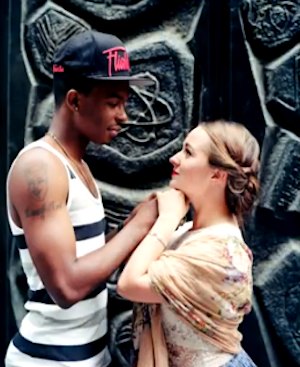 New York photographer Richard Rinaldi has embarked on a remarkable photo project called “Touching Strangers”. He wanders the streets of major cities looking for strangers willing to pair up for photographs that look as if the subjects are loving family members.

After Rinaldi arranges his strangers side-by-side, face-to-face, or kneeling beside — always with hands touching — a transformation takes place. “I felt like I cared for her,” a poetry teacher, Brian Sneeden, told CBS after he agreed to pose with a 95-year-old stranger.

“We think these great photographs have something positive to say about human connection . . . about a diverse society in which people have been taught not to touch each other but in which we can and do transcend the boundaries set around us,” said Chris Boot, the director of Aperture, a nonprofit foundation that wanted to publish a book of Touching Strangers.

A Kickstarter campaign raised more than $80,000 in the weeks leading up to August 5 to fund the collection of 70 photos.

Renaldi received his BFA in photography from New York University. Exhibits of his photographs have been mounted in galleries and museums throughout the U.S., Asia, and Europe.

–WATCH the Kickstarter video and CBS video at bottom, READ the story from Steve Hartman)