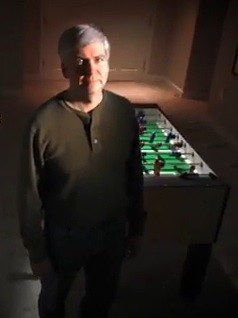 Rick Snyder is something unusual: a moderate Republican who is winning his race without the slash-and-burn tactics dominating political races elsewhere. He doesn’t back down from his commitment to forging a political common ground.

During town hall meetings across Michigan, Snyder avoids divisive topics. He launches no offensives against the Democratic Party or its unpopular office-holders in Lansing and Washington.

At a recent town hall meeting in a conservative section of West Michigan, Snyder challenged the right-leaning base of the GOP with the candor that has become his trademark. “If you step back for a minute and you look at what people are actually saying, if you peel and pull that back, about 50 to 80 percent of the time there’s a common ground that we don’t disagree on,” he said. “The thing is that we’ve got a system today that says, ‘Let’s fight about the 10 percent on the extremes.’ My view is, ‘Let’s advance the 50 to 80.”

One attendee managed to combine two of the most polarizing issues in American politics—abortion and gay marriage—into a single question. Snyder spent less than ten seconds addressing both issues and then said, “To be open with you, when I’m out campaigning, I actually don’t spend much time on social issues… my primary focus is on jobs, the economy, restructuring our government, because we’re suffering so badly here.”

Snyder, who is 52 years old, is a venture capitalist and former Gateway computer executive who lives in the liberal enclave of Ann Arbor. He has never occupied public office before. For him, merely holding a citizens’ meeting in small-town Ottawa County is something of an experiment. In dramatic contrast to nearly every other Republican candidate to win a gubernatorial primary nationally this year, Snyder owed his victory less to the GOP’s conservative base than to independents and Democrats.

The state’s open primary process allowed Democrats to cross over and vote for Snyder, giving him momentum that has carried into the general election. “A third of Snyder’s votes came from Democrats and independents,” says Craig Ruff, a public policy consultant and former GOP gubernatorial adviser. “He still would have won without them. But with them, he made it look like a cake walk.” General election polling indicates that many of those voters may cast similar ballots in November. Independents are breaking overwhelmingly for Snyder and surprising percentages of Democrats indicate that they’ll vote for him or at least have a favorable opinion of him.

Since the primary, Snyder has largely relied on an ad campaign portraying him as a “tough nerd” to propel him into a double-digit lead in his race against Lansing Mayor Virg Bernero, the Democratic nominee. He spent early and extravagantly on advertising—largely out of his own pockets—but vowed that he wouldn’t take any money from political action committees.

There is something inherently nerdy and nonpartisan about the economic and fiscal plan that is at the core of Snyder’s campaign. Armed with his accounting background and the trio of University of Michigan degrees (BA, MBA and JD) , Snyder acknowledges the complexity of the state’s economic and fiscal challenges without making them seem insurmountable.

He vows to make sense out of the state budget, making budgeting decisions based on long-term return on investment—whether that means spending less money or more. Snyder says that recent state cuts to mental health services, for example, were short-sighted and have done more long-term harm than good. He says the across-the-board program cuts that Michigan and other states have leaned on heavily in recent years are “a management failure because that means you don’t know your job well enough to say, ‘This is more important than that.’ It’s a cop-out.”

A surprising number of tea partiers are quietly supporting Snyder, even if he wasn’t their first, second or even third choice in the Republican primary election. “He is a businessman, and when he was working at Gateway he successfully grew their business,” says Roger Hensley of Kalamazoo. And even if Hensley doesn’t agree with some of Snyder’s more moderate positions, he’s setting those aside in this race. “The way I look at it,” he says, “is that if you have people who are suffering, none of that does them any good.” Some tea partiers also appreciate the hard line Snyder has taken against special interests. “In hindsight, I think it was smart that he didn’t come around begging for our vote,” says Tony Dugal of Kalamazoo. “We’re a special interest, too.”