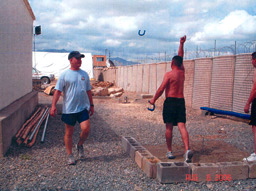 A Florida Naval Reservist, who left his position as an attorney to serve a seven-month tour of duty in Iraq, is being honored for his outstanding mentoring and role modeling while overseas. “Lieutenant Marc J. Soss of Bradenton has been awarded the Sempercomm Award for his efforts to boost the morale of his fellow soldiers while at war. He set up a 300-plus DVD library, held regular poker and horseshoe tournaments, and he never forgot a birthday. The prestigious Award goes to military members who help boost the morale of fellow soldiers serving overseas.”

Soss won the award for his major efforts to boost unit morale while serving in Afghanistan in 2006. Assigned to Camp Clark in Khowst, Afghanistan, Soss was assigned the job of unit morale, welfare and recreation director, something often thought of as the unit’s “movie night director.” Almost despite this idea, his service went well above arranging a movie night once in a while: Soss secured a 300-plus DVD library.

He set up a regular Thursday poker tournament. He made sure birthdays got proper recognition and parties happened for each person. He pulled off delivery of television service several months ahead of schedule so that unit members could watch American television. He put together a unit pool party and barbecue, complete with hotdogs, hamburgers, steaks and soda — a major feat in the mountains of Afghanistan.

Soss pulled together equipment for a 21-person gymnasium, vastly improving on the previous five-person facility. An avid running enthusiast, Soss arranged for secure transportation and lodging for unit members to participate in a marathon nearly an hour away. Soss also created and coordinated two marathons at Camp Clark itself: a Halloween “Boo Run” and a Veteran’s Day Run. To cap off his efforts, he managed a fundraiser for the Landstuhl, Germany, Wounded Warrior day-trip program, which helps American military personnel receiving treatment at the hospital there occasionally get out of the institutional setting to do something fun.

Soss is now back home and has returned to work as an attorney in Tampa. He was honored at a May 10 gala award ceremony for SemperComm winners. Winners are chosen via nomination applications received from all branches of the U.S. military. This year’s awards were presented at the Crystal Gateway Marriott across the river from Washington, D.C. (WWSB ABC-TV intv) Thanks so much to longtime GNN supporter Maureen Ogilvie for submitting the link!