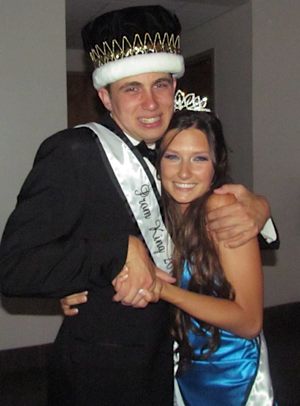 Sure, Katie is an all-American girl, class president, champion in girls basketball, and “an absolute sweetheart,” according to her teachers. Yet, it seems every student, no matter their ability, is accepted here and treasured.

“Scotty”, as the kids call him, is a HUGE personality at the school, brought out of his shell over four years by the nurturing attention given, not only by specialized staff who have tutored him as a special needs student with autism, but by the accepting student body.

When he first came to the San Diego area school, he was petrified of the chaotic sounds of 2300 kids in an assembly. Now, he attends all the sporting events cheering loudly in the bleachers. When the football team scores a touchdown, he gets the giant “W” flag and runs up and down the sidelines.

When he first came to the school, his mother said, he could never have believed he would be dancing in front of the entire school to the pulsing beat of “We Are Family”. But after just one year, his success at school — mainly, said his mother, Marlene, due to all the “regular ed” kids practicing inclusion — Scotty was able to join the Westview dance group in their twice-yearly choreographed “Friendship Dance”, which includes the special needs kids each paired with a team regular. For three years now, he has been taking a bow at every performance while flexing his muscles in the air with wild enthusiasm. (See the video below). 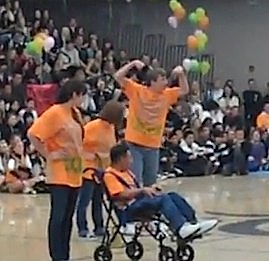 Marlene also credit the “Best Buddies” program that matches a special needs kid with a regularly-enrolled student to be partners in friendship throughout the school year. It’s one of the most popular clubs on at Westview.

This spring, when the senior class prepared to nominate boys for prom king, they put Scotty on the ballot. “Not as a joke,” said Scott Wild, a teacher and student advisor at the school, “but as a sincere tribute to him because they love him, respect him, and appreciate him.”

Mr. Wild said there were 4 other boys who were also selected to be on the ballot- – all good athletes, students, and high character kids. “They found out about Scott being on the ballot, and collectively took their names off because they wanted Scotty to win – to have his moment in the sun.”

No one knew the outcome last Saturday, when students assembled in their rented tuxedos and hand-picked dresses. Scott’s mom and older brother Kyle, a graduate of Westview, were there, too. Scotty’s “Best Buddie” was delighted to be his date for the evening. At 10 o’clock, the faculty announced the prom court winners, saving the king for last.

”When we called Scotty’s name, the entire venue packed with 800 kids started chanting his name,” recalled Mr. Wild with tears in his eyes. “He went up on stage, a big smile gleaming across his face, celebrating the moment and feeling like he was on top of the world.”

This is not normal high school stuff. With the release of the documentary, Bully, people are all too aware of the dark side for many teens. Westview should have been making their own documentary. As one educator said, “There’s a reason why everybody tries to get hired in the Poway School District, this is one of them.

Scott’s “HUGE” personality “is over the top”, says his mom, because everyone at Westview accepted him and loved him.

“We could only hope, and wish, that every special needs child in every school was truly nurtured to their highest potential the same way Scott has been nurtured at Westview.”

Mother of the prom queen, Susie Buell agrees. She wrote in an email: “Once again, we feel overcome with the emotion of how fortunate and grateful (we are) to have had all our children attend school in this district. Working in Special Ed at the elementary level, I personally know how dedicated some of the Poway Special Ed team works and their tireless commitment to their students. It is incredible!”

“Katie was so honored to share that moment with him and so proud and happy for him. It was the highlight of the her night,” she added. “She really loves him.”

The teachers and administrators at the school will very much miss Scott when he says goodbye in 2 weeks. He cheerfully helped out in the office over the years and “people couldn’t help but love him”.

Kathy, who works in his critical skills classroom told her spouse, “On Monday morning, when the doors to his bus opened it looked like a bull busting out of a rodeo gate with Scotty yelling, “MISS KATHY, MISS KATHY, I am the SUPER SENIOR POWER PROM KING!”

Mr. Wild summed it up best: “For as much as Westview High gives him, Scott Shaver has no idea how much of a gift he is to us.”