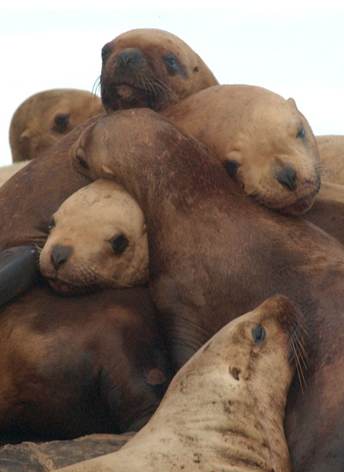 A five year plan to shore up dwindling populations of eastern Steller sea lions, the threatened species that roams from Alaska to California, has succeeded. NOAA Fisheries announced last week it will be delisting the animal as a threatened species, having exceeded its goal for annual population growth by more than thirty percent.

As marine predators that forage on a variety of fish, squid, and other species, Steller sea lions are a vital component of North Pacific Ocean ecosystems. Their recovery is a testament to the value and success of the Endangered Species Act in ensuring the health of marine ecosystems for future generations.

First listed range-wide as threatened under the ESA in 1990 following severe population declines, the Steller sea lion population was later split into Distinct Population Segments of eastern and western in 1997, following an intensive period of research on genetic structure, population trends, movements, and other factors. The eastern DPS, which ranges from Cape Suckling, Alaska, south to the Channel Islands, California, retained its threatened listing while the western DPS was classified as endangered.

After completing a five-year status review that found the eastern segment had increased from an estimated 18,313 animals in 1979 to an estimated 70,174 in 2010 — an annual growth rate of 4.18%, well above its goal of 3%) — NOAA proposed delisting in April 2012. The animal is the first to achieve recovery and delisting since the North Pacific gray whale was taken off NOAA’s endangered list in 1994.

NOAA Fisheries has developed a 10-year Post-Delisting Monitoring Plan with the states of Alaska, California, Oregon, and Washington and other partners to monitor the status of the eastern DPS and take the steps necessary to address any detected future decline in the species or increase in threats. The sea lions will also continue to benefit from protections under the Marine Mammal Protection Act, as well as other existing laws and regulations, despite the removal of the ESA protections.

Thanks to Craig Withers for submitting the link!