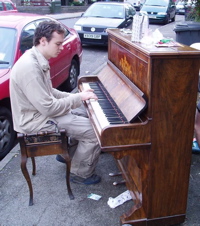 (Big Cheers for Clare Kerr for submitted this story) Sheffield, England- Three lovely blokes were moving into a flat at 165 Sharrow Vale Road when they realized their piano was too heavy to haul up their new stairs. They decided to leave it on the sidewalk for the entertainment of all. They put a sign on it which simply read: “STREET PIANO: feel free to play any time between 9am and 9pm”. Hugh ‘Bert Ray’ Jones is a vastly entertaining writer and has documented the entire story of what happened next at StreetPianoss.org. The public loved the idea, but the Sheffield Council did not, one day delivering an officially laminated notice, pinned to the piano, ordering its removal. . .

Sheffield is a very cool neighborhood housing students of college age and young families with children. The piano acquired celebrity status and the residents called on the Council to keep hands off their beloved Street Piano! Local media coverage kept the three owners busy and all manner of people were joining in to help save the piano. The local drunks were starting petitions. Jazz musicians performed at sunset on the illicit piano to the delight of all in the neighborhood. People even offered their own pianos to be placed as new Street Pianos to fulfill Hugh’s dream, which is that “One day, the world will be filled with lovely wonderful street pianos. And the streets will be filled with the sound of sweet music and everyone in the world would be blissfully, blissfully happy.”

The result was a reprieve for the piano! This week, the Council came to its senses — or, at least, adopted the sensibilities of the neighborhood — and restored harmony to the area by allowing the piano to stay – as long as its supporters continue to look after it and there are no complaints from local residents and businesses.

The Diary of the Street Piano is a worthy read. At one point Hugh recounts that after a few blissful months of communing with the neighborhood via the piano on the sidewalk, the instrument was stolen! A hilarious and streetwise account follows in the Diary, then, this:

The Sheffield Star learned of the mystery of the stolen piano and decided to…put out an appeal to donate modest sums towards our eventually being able to buy another street piano. And were the Star’s readers up for it? We were certainly pleased when after a day or two we had a phone call from one lady who wanted to pledge ten pounds to the cause… What we were not expecting was that no less than FOUR different people were each keen to donate an ACTUAL PIANO!! That certainly made my day – not to mention restoring my faith in humanity. It would seem that for every mean plotting conniving thief, there is a generous spirited, warm-hearted soul willing to donate a musical instrument of significance to a complete stranger.

Enjoy thoroughly the entertaining Street Piano Diaries, and you might want to join their forums: StreetPianos.org

On the StreetPianos forum are people who have pianos to donate and deliverers who can pick up and deliver the instrument. People who would like to act as caretaker for a piano are also involved. MAYBE you will want to set up your own Street Piano in your neighborhood? Keep us posted here at GNN-i.