Home All News World After Digging Up Thimbles for an Hour, Amateur Metal Detectives Stumble Upon... 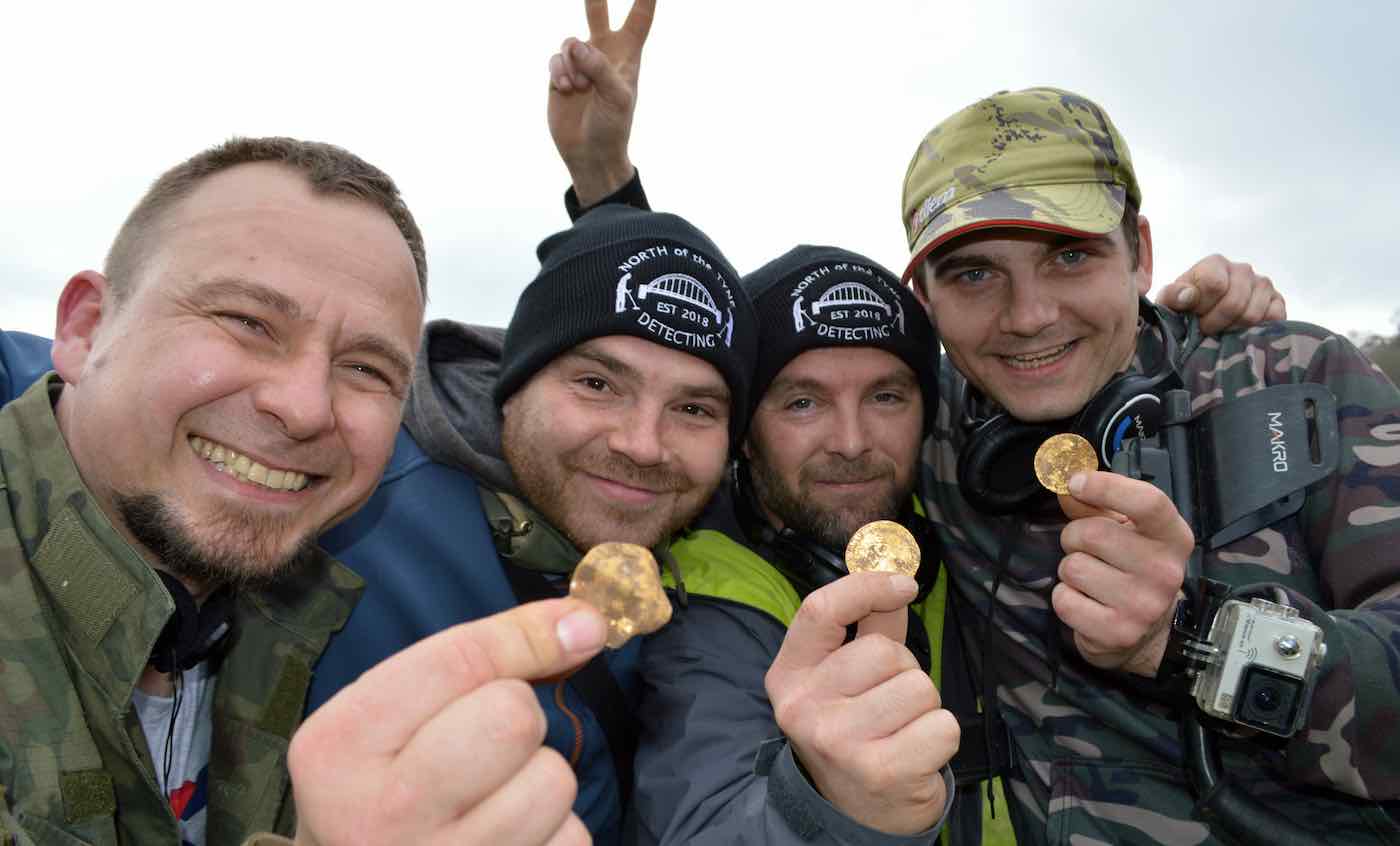 This group of amateur metal detectives has been accustomed to digging up shotgun shells and thimbles – so imagine their surprise when they realized that they had stumbled upon a literal treasure chest of gold and silver coins.

The four men, some of whom have only been doing the hobby for less than a year, were initially delighted to find 12 ornately decorated silver coins as they were using their detectors to scan a field in Buckinghamshire, England.

As they continued to unearth coin after coin, they were shocked to find that they belonged to a hidden 14th century treasure hoard.

Over the following four days, they excavated 557 coins – including 12 ultra-rare full gold nobles from the time of the Black Death.

The hoard is now being kept safe in a museum and will be independently evaluated before being sold, with the value split between the treasure hunters and the landowner in Hambleden, Buckinghamshire.

Experts estimate that the treasure – nicknamed the Hambleden Hoard – could be worth £150,000 ($193,000). It is suspected the hoard was stashed there for safekeeping by a wealthy person more than 600 years ago.

The find is believed to be the biggest gold hoard found in Britain in nearly a decade, and the largest silver coin collection found in one place for 12 years.

One of the men, 33-year-old Mateusz Nowak, says that compared to his job as a hospital cleaner in Newcastle, the discovery “felt unreal.”

“After finding the hoard, and then clearing the area, we had to extend the search twice more because we were finding so much,” says Now. “It was a miracle moment after moment for everyone.”

Nowak’s brother 30-year-old Tobiasz, who works as a baker, said: “I can’t even imagine how we got so lucky. It was the best weekend of my life. I’ll remember it my whole life.”

The brothers had spent an hour scanning the field alongside their friend Andrew Winter without finding anything. They were then on their way to another location when one of their detectors signaled that they had struck gold.

Winter said his machine was emitting a code which suggested they had detected a hammered silver coin – so he started digging.

“I swung around my machine and all the silver coins were coming in at number 16 on the screen. This indicates a hammered silver coin,” said Winter, who works as a forklift driver. “The other signal I got was a 21. It went ting, ting, ting and sounds completely different to anything else. I shouted ‘gold, gold gold!’”

The trio then turned over a clod of earth which contained two coins – and they could see more in the hole.

It happened around at the same time as then-stranger Dariusz Fijalkowski found two silver coins.

Under the rules of detecting and treasure finding, anything over three coins is considered a “hoard,” meaning it has to be declared to organizers so the area can be cleared.

The hoard was claimed jointly by the foursome, who were then left to work alone.

“The lads just looked at me and I knew then we had something special. We knew there and then this was going to be one of the ones you never, ever forget. And to do it with my two best friends was really special.

They said they had to fight off competition and admit it got “absolutely hectic” when news of the find got round the festival. The men even had to sleep in a tent to ensure that no thieves would try to steal their treasure.

Detectorists from all over the world who were at the festival came to take a look as the four dug out coin after coin.

Fijalkowski, a dad-of-three and machine operator from Bristol, came across the hoard after he had been “delighted” with a thimble he’d found.

CHECK OUT: When Homeless Man Finds Artwork That Sells for Thousands, Man Tracks Him Down to Split the Earnings

He then found two silver coins before teaming up with the other men and added: “Special for me was two silver coins. Before that – apart from the thimble – it had been shotgun shells.

“When I found the coins I was shouting so much because I was so excited. Maybe I should have stayed quiet, but I was so happy. For me, those coins alone were special. They are small pieces of silver and also a piece of history.

“But to see what we found in the end. I still can’t believe it,” he added. “I came away to the rally for a rest because I have three young children. It’s safe to say it was not rest. I can still feel the pressure now. It’s incredible.”

Andrew said the find was “very, very rare” and added: “The coins look like they’ve come straight off the shelf.

“They look brand spanking new. Some of the silver ones are really rare and have things on them – like little birds or churches – I have never seen before.”

“It feels unreal. I can’t believe it. It couldn’t have happened to three more common guys you know,” says Winter.