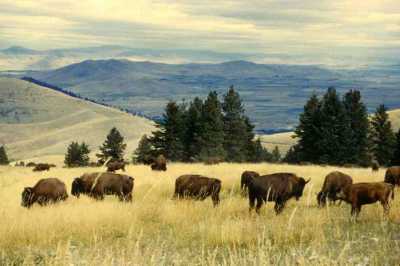 A small wild bison herd was released in Colorado, only 10 miles from Denver, to roam on prairie grasses that haven’t felt the storied animal’s footprint in more than a century. What’s more, the 1,400 acres are adjacent to a toxic Superfund site that has been successfully cleaned up and renamed, the Rocky Mountain Arsenal National Wildlife Refuge…

The transformation of the property from a chemical weapons and pesticide manufacturing arsenal to a wildlife refuge is being conducted by the U.S. Army, and Shell Oil Co. To date, more than 12,000 acres (two-thirds of the site) have been certified as clean by the Environmental Protection Agency and State of Colorado and have been transferred to the management of the US Fish and Wildlife Service (FWS). The 1,400 acres designated as wild bison habitat, FWS says was never used in making chemicals.

Bison were historically an integral component of the prairie ecosystem and their reintroduction will likely boost the health of the entire area. Migrating bison provided essential functions, such as grazing and fertilizing of grasses. This herd of 16 animals is the first to be introduced near a major metropolitan area.

Jonathan Proctor of Defenders of Wildlife told the Associated Press, “The short grass left by grazing bison is ideal habitat for prairie dog colonies, which in turn provide habitat and prey for rare species such as burrowing owls, hawks and swift foxes. Bison also add nutrients to the soil and create wallows which can attract several types of birds.”

The new refuge will also play a key part in advancing the FWS national bison conservation program which monitors genetic variety in herds from Montana to the Dakotas. 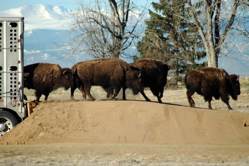 "The return of bison to the Rocky Mountain Arsenal National Wildlife Refuge signals remarkable progress both in the transformation of this site and in the conservation of American bison," said Mitch King, the U.S. Fish and Wildlife Service’s Mountain-Prairie Regional Director.

The Service will add the bison pasture to its popular public tram tour route beginning in April, which will enable the public to view the bison in their natural habitat.

Charlie Scharmann, program manager for the Rocky Mountain Arsenal. "To see wild bison roaming on this land is truly remarkable and we are proud to have played a role in this historic conservation effort. The return of this signature species, along with the bald eagles and more than 300 species of wildlife that already call this site home, make the Refuge a destination that Colorado residents and visitors alike will not want to miss."