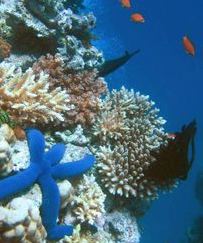 With the stroke of a pen today, President Bush will designate three new areas in the Pacific as Marine National Monuments to create the largest area of ocean protection in the world, measuring 195,000 square miles.

The three areas include the Mariana Trench and the waters surrounding three uninhabited islands in the Northern Mariana Islands, Rose Atoll in American Samoa and seven islands along the equator in the central Pacific Ocean.

Under powers of the Antiquities Act of 1906, which is usually invoked to protect cultural sites, the administration will ban commercial fishing in the coral reef ecosystems within 50 nautical miles around the islands, which have long been in U.S. possession, as well as protect them from oil and gas extraction.

Designating these three areas as Marine National Monuments will prevent the destruction of some of the world’s most pristine natural resources, rich in biodiversity.

“These locations are truly among the last pristine marine environments on earth,” said James Connaughton, chair of the White House Council on Environmental Quality. “They have had historically almost no human interaction or impact, and so we’re able to see how the ecosystem works in a way that could help inform management and conservation decisions much closer to home.”

For example, one of the central Pacific islands has an inordinate abundance of large sharks. In fact, they outnumber the smaller fish by several times.

“We don’t see that anywhere else in the world,” said Connaughton. “The marine biologists are kind of scratching their head and saying, how can that be? How can the food pyramid be upside-down in this area, and what does that tell us about what other coral areas should look like if we’re managing them appropriately?”

The Marianas Marine National Monument contains the Mariana Trench, the deepest ocean canyon known to science –even deeper than Mount Everest is high and several times larger than the Grand Canyon.

The other feature of major importance in the new Marianas Monument is the pristine coral reef ecosystems that surround the three northernmost islands of the chain. These ecosystems are home to more than 300 species of stony corals and they have some of the highest fish abundance and fish diversity in the entire Marianas Islands chain of 14 islands.

The second monument the U.S. will be protecting is the Pacific Remote Islands National Monument, home to endangered turtles, millions of nesting seabirds and migratory shorebirds and pristine corals with hundreds of different fish species.

The third monument will be the Rose Atoll Marine National Monument. Rose Atoll is a remote area around American Samoa containing a tiny but spectacular coral reef area renowned for the pink hue of its fringing reef. The waters around Rose Atoll also are home to giant clams, reef sharks, and very large parrot fish, and are a frequent location where you can find humpback and pilot whales and porpoises 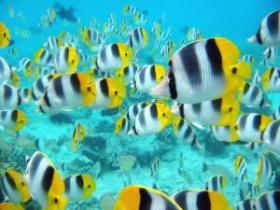 “It’s also off the charts when it comes to the extent of coral cover,” said Connaughton in a press conference. “It has some of the broadest extent of live coral cover of any place on earth — again, something we can learn from, given the breadth of it over the system. It also includes rare species of nesting petrils, shearwaters, and terns.”

The Bush administration placed a high priority on addressing what is now a global consensus on overfishing and the need to restore the vitality and biodiversity of our fish stocks and marine areas. As a result, the president protected huge swaths of marine habitat, just as earlier presidents protected mountain valleys, gorges and redwood forests.

Conservationists were shocked in June 2006, when Bush created, what was until now, the largest protected marine sanctuary in the world covering nearly 140,000 square miles in the Northwestern Hawaiian Islands. Home to 7000 marine species, at least a quarter of which are found nowhere else, the expansive Papahanaumokuakea Marine National Monument is larger than all US National Parks combined, stretching the distance from Chicago to Florida.

That move, combined with today’s action, means to Connaughton that “in the last eight years, we’ve been able to accomplish conservation in marine environments on par with what we’ve achieved on land over the past 100 years.”

(Thanks to Jenny Cellander for submitting the story tip.)