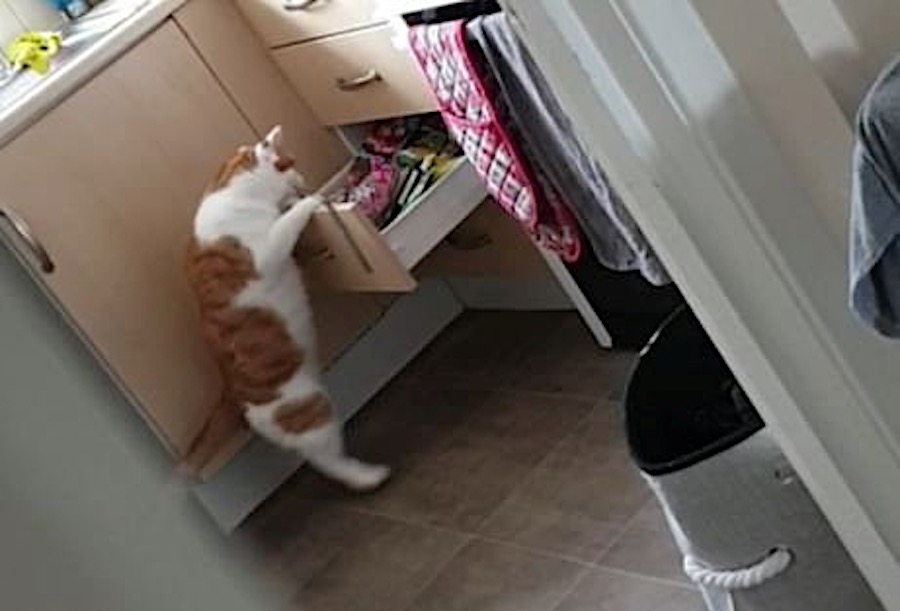 A sneaky feline has learned how to open kitchen drawers and raid its owner’s stash of sweets.

The cat burglar named Muffin apparently was hungry and stalked about the kitchen looking for treats on which to munch.

Owner Sarah Taylor filmed the four-year-old Tabby on June 13 as it balanced on its hind legs, pounced on the drawer handle, and used its front paws to pull open the cabinet.

He immediately spotted what he wanted, pulled it out, and strolled calmly away with the packet of treats in his mouth.

“Muffin’s been opening drawers for a year or more now, but I’ve never seen him open one until I started filming him,” said Sarah, 23, of Sunderland, England.

“Obviously, I wasn’t going to let him have all the treats (but) it didn’t seem right not to give him one after doing that little trick.

Sarah’s other cat Molly is not, however, quite as bright and simply loves to jump into the drawers that Muffin opens.

(WATCH the video below, courtesy of SWNS)

SHARE the Giggle with Cat Lovers on Your Social Media Feeds…