When a young couple went on their 2014 honeymoon in Madagascar—one of the most cherished environments in the world—the heartbreaking problems of indigenous people, forests, and lemurs swirled around in their minds until one day a holistic solution revealed itself, like a bright sunbeam through the tangle of jungle canopy.

Their notion of how they could benefit both wildlife and people is today a program that is easing the poverty of the Malagasy people, while helping to save the endangered lemurs, which are found on the island of Madagascar, and no where else.

The nation’s economy is the fourth fastest-growing in the world. In fact, one fourth of the globe’s vanilla comes from the island. Yet the vast majority of the adult Malagasy people can’t even read, so they don’t benefit from the higher-paying jobs. They are left to fend for themselves, living off the land—which encroaches on and endangers the wildlife surrounding them.

The couple, Shana and Vlad Vassilieva, learned all this from their tour guide, JJ (Jean-Jacques Rafenomahazomanana), a passionate local who shared his vast experiences of Malagasy culture and led them beyond designated tourist zones, into isolated villages.

There, they noticed that the schools for children had no books—and the agricultural practices in villages were not sustainable. They decided they could address both these problems, by tackling the literacy issue.

They partnered with JJ to create the Mobile Library Project, designed not only to teach people about letters, but also about their lemurs.

“One of the main goals is to help the Malagasy see how much can be gained from the forests and nature when you take care of it and practice more sustainable methods,” said Shana. “So while kids and adults are learning to read, they are also learning how to thrive off the lands in more mutually beneficial ways.”

LOOK: Dozens of Creatures Thought to Be Extinct Found Alive in ‘Lost City’ in the Jungle

The non-profit Mobile Library Project employs two additional educators and operates out of a van that travels to four villages every month in coordination with local schools. 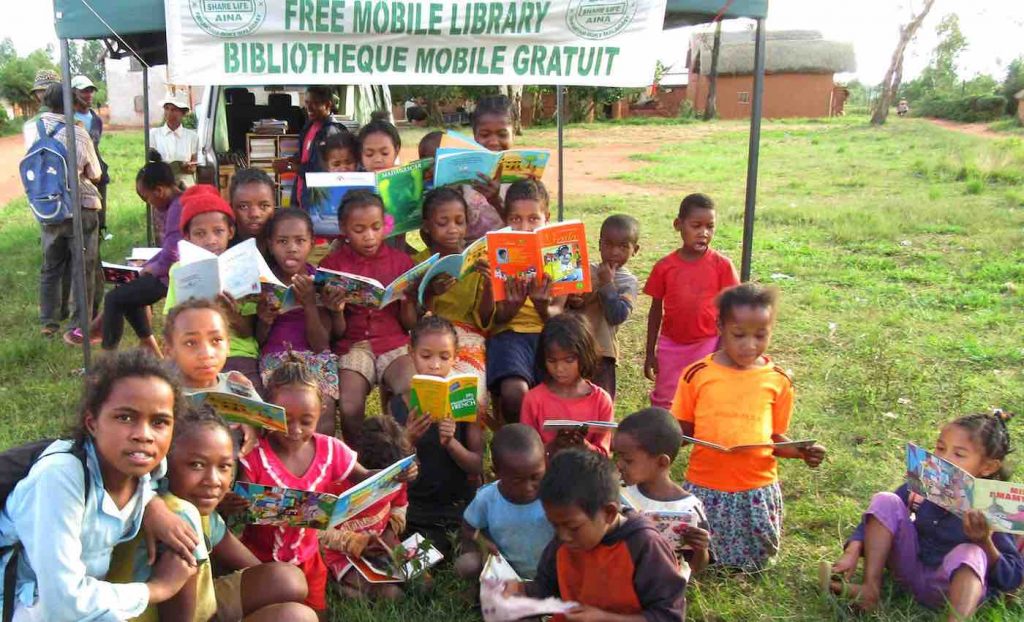 They not only provide books and lessons on reading and writing, the group also offers workshops on how to improve your crop yield and how to rely less on the forests. That way, the Malagasy can develop new resources and leave more of the forest to the indigenous animals—80 percent of which are not seen anywhere else in the world.

“When the people read books, they start to see the relation between the environment and people,” said Madagascar native JJ, who serves as manager of the nonprofit. Speaking to Shana, an Idaho filmmaker, as part of a short documentary, he explained that the people are learning “if they protect the forest, they can get a lot of benefit from it.”

The project also gives families seeds to plant. Whenever a family joins the book project they also get some seeds, along with a book. Each school the project visits also gets fruit trees. When it’s grown, the students can eat the fruit, or teachers can sell the fruit to help pay for supplies and other needed improvements. The trees also help retain water in the soil, provide shade cover for plants, and prevent soil erosion. They are also sharing ananambo trees because they have medicinal benefits and a denser nutritional value, and beans since they are easy to grow.

MORE: Here’s Why You Can Hail 2019 as a Year of ‘Incredible Species Action’

Since 2016, the group has helped to educate 6,200 people, planted 80 trees at 14 schools, and distributed 66 pounds of seeds for 46 families—as well as thousands of books.

The couple also partners with Zara Aina, a Madagascar nonprofit, and received some grant funding to launch the first tour in 2016. Since adding the seed and tree sharing program in November 2018, they’ve expanded their vision further, hoping to offer micro loans to help Malagasy natives develop their own businesses.

“I love the idea of becoming, not just a mobile library for education, but also a mobile ‘re-greener’ and conservation based financial empowerment tool on wheels,” she said.

WATCH the video about the Lemur connection, and FIND more info at mobilelibraryproject.com…

Support the People of Madagascar… By Sharing on Social Media