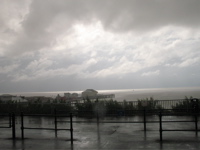 Hurricane forecasters who predicted another record-breaking year for tropical storms were wildly off the mark as the season is winding down with only one more hurricane expected. A welcome relief for storm-weary coastal residents was the unexpected and speedy development of the El Niño warm water phenomenon in the eastern Pacific, faster than almost anyone had predicted, putting an end to hurricane formation in the Atlantic, said William Gray, a noted forecaster at Colorado State University…

Last year a 72-year-old record was shattered by a total of 28 tropical storms. This year the United States has not been hit by a single hurricane.

In 2006, Ernesto struck Florida as a tropical storm and did little damage, after its brief stint as a hurricane near Haiti and Cuba, and Hurricane Florence only brushed Bermuda. (ENN)