Home Most Popular Extinct in the Wild, Toad Makes a Comeback 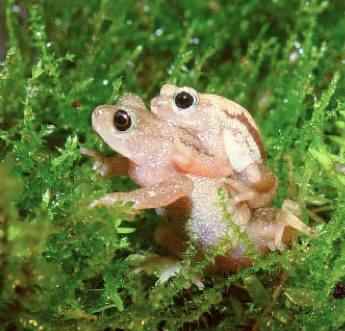 The thumbnail-sized golden colored Kihansi Spray Toad, only discovered by scientists in 1996, was officially declared Extinct in the Wild by the International Union for Conservation of Nature in 2009.

But thanks to a captive breeding program begun in 2000, the amphibian has been reestablished in its only known habitat, beneath a waterfall’s continuous spray in south-central Tanzania. From a collection of 499 toads saved in the wild by the University of Dar Salaam, the Wildlife Conservation Society, the Bronx Zoo and Toledo Zoo have multiplied the captive population to more than 6,000. This week, more than two thousand of the tiny toads were reintroduced to their wet native habitat, at the base of the Kihansi Gorge.

“This is one of the great stories of amphibian conservation,” said R. Andrew Odum, curator of herpetology at the Toledo Zoo. “The level of collaboration from the Tanzanian government and the participating zoos, to the Tanzanian field biologists and students who shared their knowledge with us, has been nothing short of inspiring.”

The toad’s extinction followed the building of a hydroelectric dam upstream which cut the water level and the worldwide emergence of the amphibian fungus.

The unusual life cycle of the Nectophrynoides asperginis includes females giving birth not to swimming tadpoles but to tiny froglets.

Prior to its reintroduction, several initiatives were made to restore the Kihansi Gorge ecosystem. These included the installation of an expansive misting system designed to replicate the spray zone habitat that was lost after dam construction, and building of bridges and walkways to facilitate monitoring of the gorge. Funded by the World Bank and the Government of Norway, the misting system has been running since late 2000 in order to restore and maintain the native vegetation that the toads once lived amongst, and the invertebrates upon which they fed.

At this stage, preliminary ‘soft’ release studies involving toads within mesh cages situated in the native habitat have shown success.

“We have been working for more than a decade to save this species and reintroduce it back into the wild,” said Jim Breheny, Director of the Bronx Zoo.”This landmark occasion is reason to celebrate.” 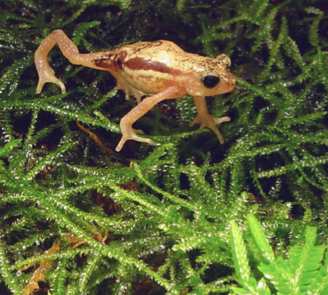 A total of 2,500 animals were flown to Tanzania from the Toledo and Bronx Zoos. The animals made their international journey safely and were acclimatized before their release. Future releases are expected as researchers work towards reestablishing a viable population in the wild. The reintroduction of the Kihansi Spray Toad is being led by researchers from the University of Dar es Salaam, the National Environment Management Council of Tanzania, and Tanzania Wildlife Research Institute, in international collaboration with scientists from the University of Georgia’s Savannah River Ecology Laboratory, Toledo Zoo, Wildlife Conservation Society, IUCN SSC Amphibian Specialist Group, and Global Wildlife Conservation.

“Most reintroductions for amphibians and reptiles have been designed to establish or augment a population of a rare species, but it is extremely exciting to be involved in actually returning a species that was extinct in the wild back to its native habitat.” said Dr. Kurt Buhlmann and Dr. Tracey Tuberville, Associate Conservation Scientists with Global Wildlife Conservation.

Co-Chair of the IUCN SSC Amphibian Specialist Group, Dr. Claude Gascon, stated, “The success story of the small Kihansi Spray Toad can teach us big lessons for the future of biodiversity conservation. This success story has only been possible with the help and partnership of many organizations around the world and the leadership of the Government of Tanzania, and the belief that no species and no situation is too dire to try to save life on Earth. Extinction in the wild is not forever.”