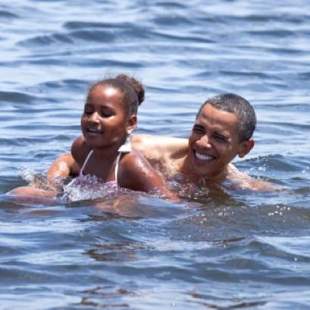 Last month, First Lady Michelle Obama told residents of Florida that she was bringing her family on a summer vacation to Maine. They suggested, ‘Why not vacation here on the white sand beaches of the Gulf coast where businesses are suffering with the BP oil spill having scared away tourists?’

Well, on Saturday, the First Family did just that, traveling to Panama City Beach, where, besides swimming in the clean water with his daughter, President Obama met with small business owners to discuss the recovery.

Following the roundtable discussion, the President spoke about his sustained commitment to the Gulf.

“Already, more than 26,000 square miles were reopened for fishing at the end of July, and another 5,000 were reopened earlier this week. We’ll be reopening more areas as tests show that the waters are safe.

Commercial shrimpers returned to the Gulf this week for their first day’s catch since the disastrous spill and reported their catch was plentiful and free of oil.

“The fall shrimping season in Louisiana’s coastal waters opened Monday amid anxiety over whether the catch will be tainted by crude or whether anyone will buy it even if it is clean,” said an AP report.

“We’re not seeing any oil where I’m at. No tar balls, nothing,” said Brian Amos, a 53-year-old shrimper who trawled in his 28-foot skiff, The Rolling Thunder, in a bay near Empire.

During the First Family’s visit, they encouraged others to enjoy the Gulf Coast beaches and swim like the President and Sasha did, at places like Alligator Point at Panama City.