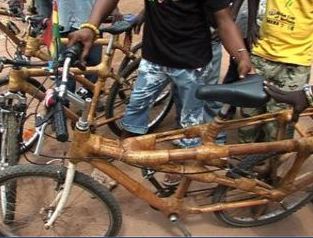 A new kind of bicycle, lightweight and sturdy, made from the abundant bamboo in the forests of Ghana is making life easier for farmers and villagers who cannot afford cars and trucks.

In 1999, an American engineer, David Peckham went to Ghana to study ways to make bicycles more accessible. The Village Bicycle Project was born. He trained locals to craft the simple bikes, which need no electric machine tools to create. Regional Peace Corps volunteers brought the idea to their towns. And it grew and grew.

The Project donates and ships used bike parts from Western countries while providing bicycle repair training and new tools. So far, it has imported 36,000 used bicycles, tutored 5,300 people in bicycle maintenance workshops, and distributed 14,000 tools across 8 African countries. The freedom and easing of hardship this program has created in so many villages is inspiring.

Watch a trailer from the film about Village Bicycle Project that toured 15 cities worldwide with the 2007 Bicycle Film Festival, a touching story of how a bicycle can change life in Africa.