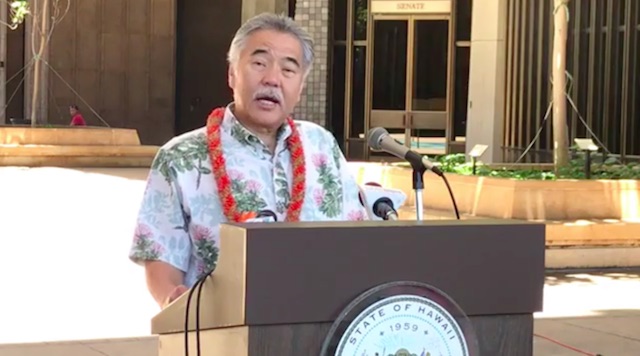 Hawaii has just become the first American state to ensure their accordance with the Paris Climate Agreement.

The announcement came just days after President Trump announced that the United States would be pulling out of the treaty. Though the details and deadline of this proposal are limited, thousands of American mayors and state Governors have insisted that they would be following the Paris Accord at a state and city-wide level.

Hawaii became the leading example of these statements when Gov. David Ige (D), Honolulu Mayor Kirk Caldwell, and other state representatives signed bills SB 559 and HB 1578 into effect on Tuesday.

The bills outlines several strategies, plans, and advancements to reduce greenhouse gas emissions in accordance with the international treaty’s goals.

“The legislature finds that not only is climate change real, but it is the overriding challenge of the 21st century and one of the priority issues of the senate,” reads one of the bills. “Climate change poses immediate and long-term threats to the State’s economy, sustainability, security, and way of life. Hawai‘i has a tradition of environmental leadership, having prioritized policies regarding conservation, reduction in greenhouse gas emissions, and development and use of alternative renewable energy.”

Furthermore, dozens of Hawaiian mayors have agreed to take action along with the state in practicing safer agricultural methods in order to meet the Paris Accord’s goals.