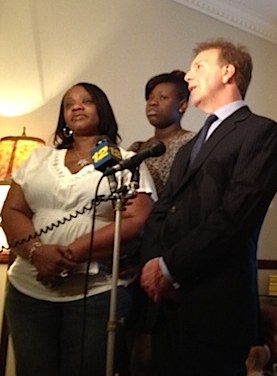 When 36-year-old Nordia Palmer-Ferguson went to her doctor complaining of blurred vision, headaches, pressure and swelling in her left eye, little did she know she was facing the possibility of blindness, or even death. Thanks to the ingenious solution of an ophthalmologist and professor of surgery at Cornell, not only was her life saved, but her eyesight has been completely restored.

Not long after giving birth to her daughter earlier this year, Nordia Palmer-Ferguson noticed discoloration in her left eye, which became swollen and painful. A neighbor, who is a nurse, told her she might have broken a blood vessel during delivery. The pain persisted, the eye became enlarged, and her vision blurred. She knew something was wrong.

“I was in a lot of pain,” she explains. “My eye basically shut down.”

Ms. Palmer-Ferguson saw her primary care physician, who sent her to an eye specialist.

Her diagnosis, dural arteriovenous fistula of the superior ophthalmic vein, was extremely uncommon. Even after meeting with a series of doctors, and undergoing two surgeries, the stubborn problem persisted.

Today, the mother of three feels that the road to Dr. Henry Spinelli’s office — and to the technique he used to cure her condition — is nothing short of a miracle.

The challenging case was referred to Dr. Spinelli, a world-renowned plastic surgeon, ophthalmologist and specialist in neurological surgery at Weill Medical College of Cornell University who enjoys doings procedures that nobody else will do.

“This was a very big deal,” he said. Pressure was building up behind the eye, with the blood actually flowing in reverse — toward the eye. Time was of the essence. “She could have gone blind and actually hemorrhaged substantially.”

Dr. Spinelli weighed two courses of action. The first would be massively invasive, cutting through the skull and removing the upper part of her eye socket and forehead bones, allowing access to the front of the brain and the back of the eye. “The removed bones would have to be replaced and (the patient) would have had to undergo a formal reconstruction of these elements,” Dr. Spinelli explains.

The second option — a procedure devised by Dr. Spinelli while at Yale University Medical Center — involves inserting a tiny plastic tube, or micro-catheter, in the surgically exposed vein. Under X-ray guidance, the tube is advanced to the site of the abnormal connection between the arteries and the vein. Once in place, specially designed platinum wires, or coils, are positioned by two neuro-radiologists with a glue material to decrease the abnormal blood flow. Due to the rarity of the condition, he has performed this procedure only a half-dozen times. 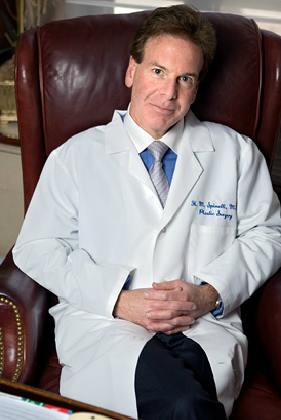 Dr. Spinelli chose the latter approach. Had this groundbreaking procedure not worked, he would have had to perform the more invasive surgery — going through the skull.

The surgery this past Spring, which lasted just four hours, entirely cured her condition.

Her life completely turned around, once Palmer-Ferguson was released from the hospital after only three days. “Not only is she cured,” Dr. Spinelli beamed, “but she has 20/20 vision, and no pressure!”

“Oh my God, he is an amazing person,” she says of the doctor who saved her eyesight, and quite possibly her life. “If it wasn’t for him, God knows what would have happened. I was in a terrible situation. Compared to where I was, it is truly a miracle.”

About Henry M. Spinelli, MD: In his Manhattan practice, in addition to cranio-orbital surgery, Dr. Spinelli focuses on a range of cosmetic and reconstructive procedures of both the face and body. Dr. Spinelli obtained degrees from Johns Hopkins University and The New York University School of Medicine. He was formally trained in ophthalmology at Manhattan Eye, Ear, and Throat Hospital, general surgery at Columbia-Presbyterian, and plastic surgery at New York University. Additionally, Dr. Spinelli has subspecialty training and expertise in craniofacial, aesthetic, and microsurgery.