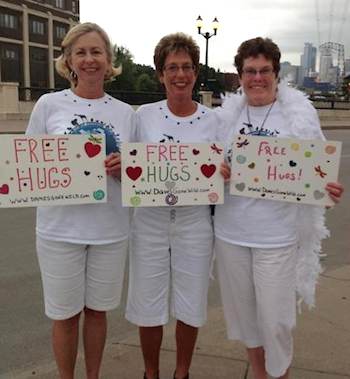 Two best friends in Florida after leaving jobs that no longer fulfilled them decided to pack their bags and go on a “Summer Service Adventure”. 56-year-old Carol Hasbrouck and 60-year-old Joyce Claflin left their St. Petersburg home in June embarking on a 33-city volunteering tour under the banner, “Dames Gone Wild”.

“We had the courage to leave our home,” wrote the pair on the NPR blog, Participation Nation. “The response we’ve received has been overwhelming.”

On August 20th they joined a friend and gave out free hugs in Burlington, Vt., their fifteenth stop on the 33-city itinerary.

They’ve given help to homeless shelters, senior citizens, brain injury patients, and Habitat for Humanity. They’ve helped create quilts for orphans, volunteered at a holistic Hispanic center, and joined an educational puppet troupe. Both have been avid volunteers since they were children.

“Our lives will never be the same.”

The pair — one lost her job as a mortgage broker and one is a massage therapist involved in the holistic arts — are staying with host families along the way. The are still looking for someone to host them in Kill Devil Hills, NC and Charleston, SC in September.