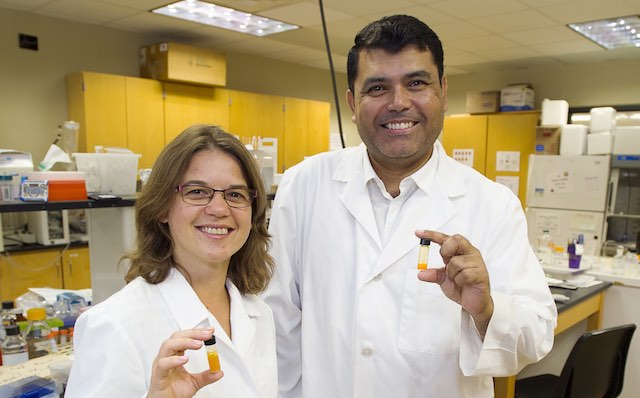 For millions of people whose vision is clouded by cataracts, surgery has been the only option. Soon, they may be able to treat–and even prevent–the debilitating condition with simple eye drops.

Researchers at Louisiana State University have formulated drops made of nanoparticles that are able to efficiently deliver into the eye lens the natural substance called lutein–which is plentiful in youthful eyes, but diminishes in old age.

Professor Cristina Sabliov and assistant professor Carlos Astete in the LSU AgCenter Department of Biological and Agricultural Engineering found a way to use nanoparticles to make the plant-based anti-oxidant more absorbent for humans.

Lutein is a naturally occurring yellow pigment known as a carotenoid and found in many plants, including yellow flowers and corn, as well as egg yolks and animal fats. The lutein currently available as a dietary supplement can help replenish ocular lutein, but the benefits are limited due to the substance’s poor water solubility, its susceptibility to degradation and low absorption efficiency.

“The nanoparticle matrix can deliver lutein to the eye efficiently, which improves its effect against cataracts,” Sabliov said.

CHECK OUT: Ex-NASA Engineer to Plant One Billion Trees a Year Using Drones

The nanoparticle matrix may enhance the benefits of lutein by preventing it from disintegrating before it collects in the eye lens, where cataracts occur, Sabliov said. Improving lutein’s stability would also help it remain in the lens, potentially preventing future damage.

“This new product would have the unique advantage of both being able to prevent cataracts before they start or to treat cataracts after they form,” she said.

“A drop to prevent cataracts has been sort of the holy grail,” she told The Advocate, which published a feature story on the breakthrough.

Cataracts are a common condition in older adults that causes the lens of the eye to become cloudy and block light from the retina. There were more than 24 million cases of cataracts in the U.S. in 2010.

A bigger problem occurs across the world, where cataract surgery is less accessible, and the condition is responsible for blindness in millions of people, according to the World Health Organization.

The lutein eye drops, which the AgCenter is in the process of patenting, could offer an effective, non-surgical treatment option that would be available in developing countries around the world.

Tests on rats have been successful in reducing the size of cataracts in just one week, but the team expects further animal tests and human tests to take years before the eye drops can hit the market.
(Photo courtesy of LSU)