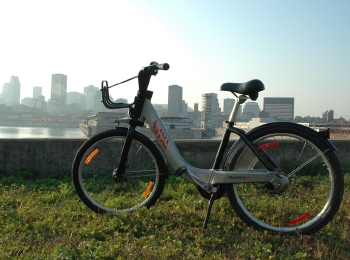 Pay $5 per day, at any of the solar-powered bike stations — or ride 30 minutes for free. Annual memberships are just $78.00 (Canadian). 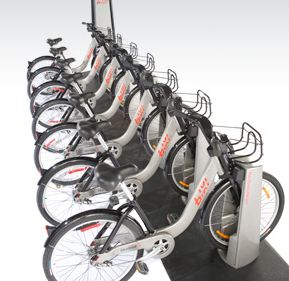 The program is called BIXI — a word, created by the mayor, using bicycle and taxi. It was inspired by existing public bike systems like the successful program in Paris. Yet BIXI represents a major step forward for bike sharing schemes.

Innovation can be found throughout the system: Bixi’s modular nature facilitates rapid installation; the public can ride instantly with no preparation; its portable wireless communication is fueled by solar power; it employs a unique anti-theft mechanism; its operational software won awards in the Pay and Go system.

Montreal spent 15 million Canadian dollars (about $13 million) to develop and start the bike sharing system, although it is budgeted to ultimately become financially self-sufficient. But Montreal has received seven patents for Bixi and Mr. Lavallée hopes to sell it to other North American cities. (Read more at New York Times)