Home All News Religion Muslims in America: A New Day Under Obama 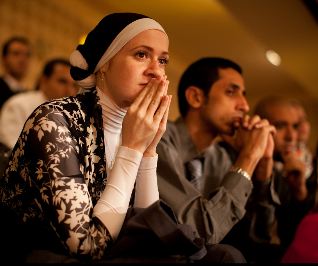 Because the notion of Muslims as scary “others” was so pervasive in some areas of America, I had hoped  the election of Barack Obama might make a difference. It has.

The day before the November presidential election, I was checking in my bags at the San Francisco airport. I handed my driver’s license to the woman behind the counter and told her my name. When she looked at me, I could tell there was confusion and apprehension behind her mask of polite professionalism. I’d seen that look many times before.

“I’m sorry”, she said carefully, apparently apologizing for her reaction to my name.

“My first name is al-Husein”, I replied, winding up my wicked curveball. “You know, like Saddam Hussein.”

She responded with a blank stare and a nervous little laugh. Then I let the moment pass and steered the conversation back on script.

That type of exchange had been a fixture in my life from the time of the first Gulf War until election day 2008. Muslims were not seen anymore as neighbors who lived, worked and prayed in the same communities as our non-Muslim fellow citizens.

But when I flew back into San Francisco a couple of days later, and the new agent did a double-take when hearing my name, I had already revised my routine.

“My first name’s al-Husein”, I told him. “You know, like Barack Hussein Obama.”

As Obama himself pointed out in a television interview with the Dubai-based Al Arabiya network, he has a large Muslim extended family, although he is Christian. Despite the rumours during the election campaign about Obama being a “closet” Muslim, 68 million Americans still voted to put him in the Oval Office.

Since election day, my neighbors and co-workers see me as an American much more easily than before. This may simply be a perception on the part of us Muslim Americans, but it is reinforced continually by the American president as he talks about his Muslim – and American – heritage. Obama continues to publicly affirm that “many other Americans have Muslims in their family, or have lived in a Muslim-majority country. I know, because I am one of them.”

Americans in general now see Muslims a bit more clearly than they did before. Obama has opened the door for Americans to ask the question, “Who and where are these Muslim Americans?”

And we, who have been living productive, yet by and large still invisible lives in America, are taking the opportunity created by our president to come out of the closet collectively.

Muslim Americans are now more than ever standing up for America (and are no longer standing up to America.) We are doing so to answer our president’s call to serve America, and Americans, in this time of greatest need. We observe this all over the country, for example in the work of free health clinics started by Muslims Americans to serve their neighbors, such as the Umma clinic in Los Angeles or the IMAN clinic in Chicago.

Obama’s presidency has allowed us to ignite the conversation that we Americans have been afraid to have: one in which we explore each other’s beliefs and traditions by first putting aside our preconceptions or judgement. The president has modelled how such an interfaith conversation should begin: first, by assembling American faith leaders – purposefully including Jewish, Muslim, Catholic and Hindu ones – to his Advisory Council on Faith-Based and Neighborhood Partnerships, and, second, by creating opportunities for his Advisory Council to focus on the common good, which begins with service to America.

The purpose behind my own service to America, working on Patheos – an online destination for people to engage in a global discussion about religion and spirituality  –  is to help this conversation along and, on a larger scale, to build a bridge across that perceptibly narrowing divide that separates people of different faiths. 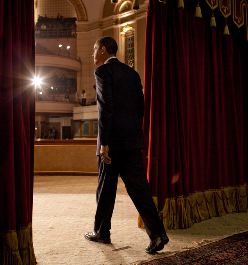 Patheos features content related to Obama’s speech in Egypt (photo, right)  from an array of faith traditions, including contributions from Protestants such as Daveed Gartenstein-Ross, author of My Year inside Radical Islam, Jews such as Rabbi David Saperstein, and one of America’s most prominent Evangelicals, Dr. Joel Hunter. The site also highlights a dozen Muslim perspectives on the president’s recent visit to the Middle East.

The site also features a “public square” where visitors can learn how their different faith traditions – their own and others – view issues of common concern such as same-sex marriage, abortion, martyrdom or even religious authority.

Americans have come to a point where we cannot simply fall back on empty stereotypes about religious “others”. This requires that the global conversation about religion and spirituality be made public, not simply for the sake of our individual well-being, but also for the sake of us all. As we like to say at Patheos, it’s about time.

Al-Husein N. Madhany is the Muslim gateway manager at Patheos.com, a place to engage in the global dialogue about religion and spirituality. This article was written for the Common Ground News Service, 23 June 2009, www.commongroundnews.org (Reprinted with permission)