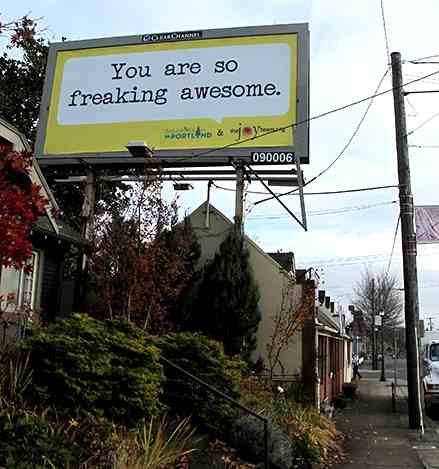 Another randomly positive billboard has popped up in Portland this week. The yellow sign towering above Sandy Blvd., at 35th street, declares, “You are so freaking awesome”.

It is the second of eight positive advertisements, paid for by a grant from Awesome Portland, erected and designed by The Joy Team of Vancouver, Washington whose mission is to encourage positive thinking.

The first billboard in the eight month campaign was up in October, with a message for drivers on Interstate Ave: “Be Happy”.

“The November billboard is one of my favorites,” said Michele McKeag Larsen, founder of the local positive thought organization, The Joy Team. “It’s a little irreverent, so people look twice.

“This is exactly the kind of quirky and random (yet warm and fuzzy) idea that makes Portland an awesome place to live and this project is a great example of how our 1000 bucks can be spent to do something truly inspirational,” said Leslie Rogers of Awesome Portland.  “We like that this project has the capacity to reach so many people and will make them smile.” 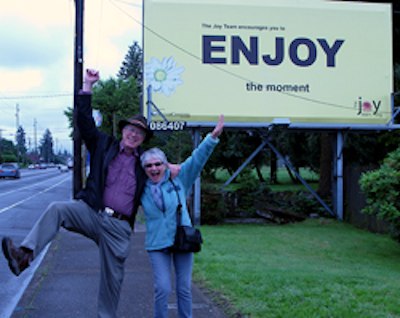 Billboard locations and photos can be found as available at TheJoyTeam.org.

Founded in February 2010, The Joy Team is a non-profit 501c3 corporation based in Vancouver, Washington, with the mission of building community by spreading joy, optimism and inspiration. Projects of the positive thought organization include billboard campaigns, delivering Happy Packets to the staff of organizations serving the community, Chalk the Walks, the PB & JOY Project and The Junior Joy Team.