Home All News Inspiring After Mailman Puts Off Retirement Out of Love for Neighbors, Hundreds of... 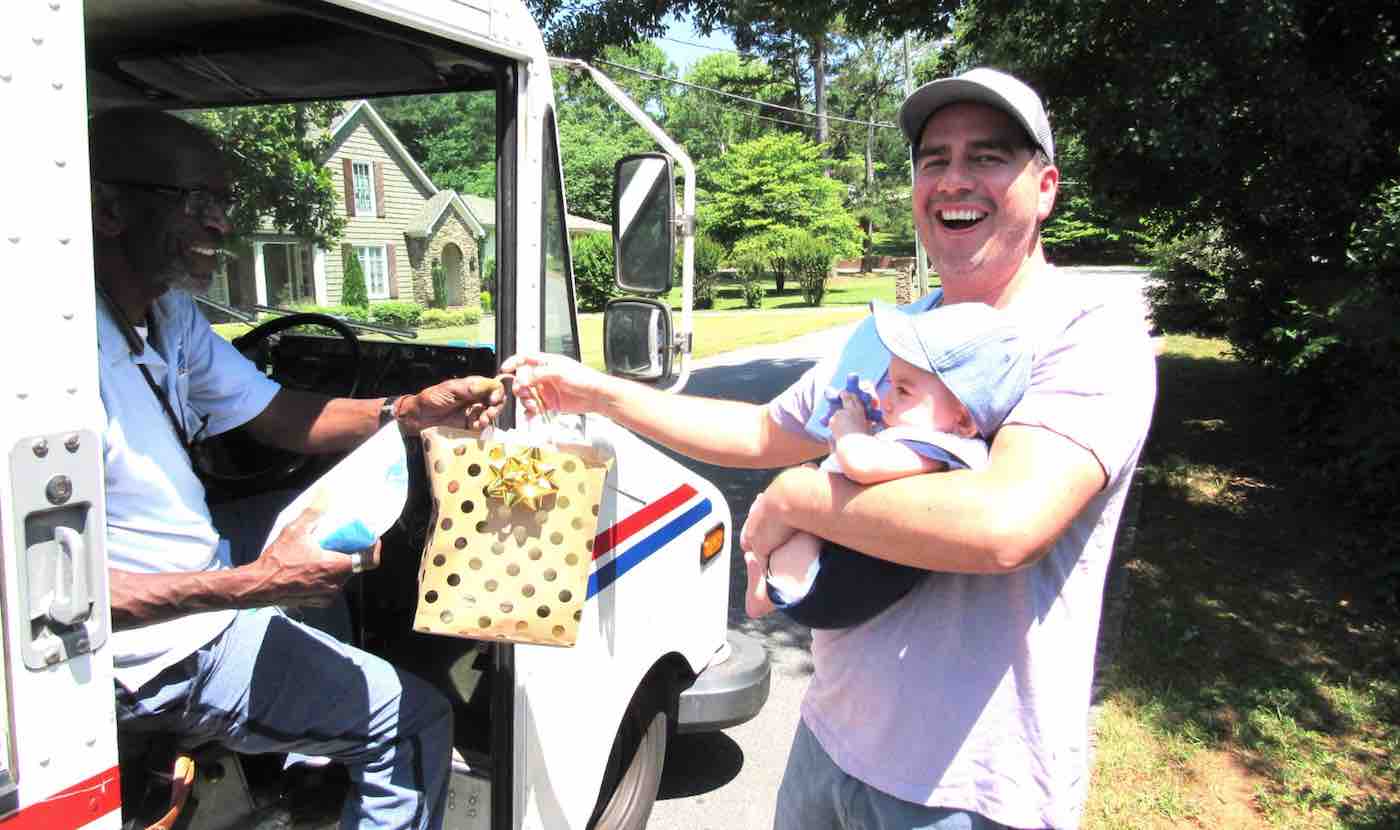 This community’s affection for their mailman has been so contagious, people from all over the country are pitching in money to send him to Hawaii for his retirement.

Floyd Martin has been a mailman in Atlanta, Georgia for 35 years, but for the last two decades, he has driven the same route through the Marietta neighborhood and delivered mail to the same 500 houses.

However, Martin did not earn his “local celebrity” status just for delivering letters and packages.

Every day without fail, the 61-year-old postal worker would give lollipops to the local kids; he smiled and waved to homeowners; he checked up on the families; he brought newspapers to the front doors of elderly residents; and he even doled out cat and dog treats to all the neighborhood pets.

MORE: When Man Was Trying to Sell His Car to Save His Dog, Community Came to His Rescue

Much to the heartbreak of the residents on his route, Martin announced two weeks ago that he would finally be retiring.

“I could have left them a long time ago, but I wouldn’t,” said Martin, “because I love them.”

Initially, Martin said that didn’t expect very much recognition for his retirement – but then his story reached social media.

Lorraine Wascher was waiting for him today. She's been a stop on his route for more than 20 years. "He always had a smile, always had a wave." pic.twitter.com/v8dD8CVoq9

On Martin’s very last day of work, local journalist and Atlanta resident Jennifer Brett hopped in his mail truck so she could document the affectionate interactions between him and the families on his route.

She then posted pictures and anecdotes of the interactions to social media in a continuous Twitter thread.

In one of her posts, Brett writes: “Doreen Hipps, 87, has been on his route since the beginning. Her granddaughter Amanda Seals spoke on her behalf tonight. ‘Dementia has set in, and she doesn’t see well anymore, but she still knows Floyd.’”

Lots of the "mail" Floyd picked up today was hand-delivered. "My people are so good to me," he said. "I'm going to miss them." pic.twitter.com/e6Mi8WctZl

In another tweet, a woman described how meeting Martin for the first time “was like meeting an old friend.”

Finally, as a means of giving Martin a proper sendoff, the neighborhood hosted a block party in his honor.

To Brett’s surprise, her tweets were shared thousands of times. One reader in particular was inspired by a quote from Martin about how he hoped to visit Hawaii one day, so they started a GoFundMe page to raise money for his dream vacation.

Kids on his route love, love, L-O-V-E Mr. Floyd. Little Mae Bullington dressed up as Mr. Floyd on the day her school had career day. "I was so flattered," he said. "It touched my heart." pic.twitter.com/BbeT3AlhHp

Since it was created one week ago, the campaign has surged past its original goal and garnered over $32,000 in donations from hundreds of people all over the country.

One of the donors, a woman named Susan Taylor, even left a comment describing her own experience with Martin.

RELATED: After 12 Years of Waving to Students From Her Window, Watch Her Reaction to 400 Kids Saying Goodbye

“I donated because Floyd truly has been a hometown hero. He has been my mail carrier over 18 years with three different addresses. He even remembered me when we moved overseas for seven years.

“He was a ray of sunshine as I waited for his deliveries as a brand new, lonely, worn-out mom. We stocked the freezer with popsicles for summer days and the kids would run to help cool him down. He never once complained – always with a smile. I cried when they changed his route. I wish ALL the best of the best for Mr. Floyd!”

"He feeds all the cats," said Peggy Corn, who's been on Floyd's route for decades. "They all know him, and they know that buggy!"
"The dogs, too," Floyd said. "The dogs get Milk Bones." pic.twitter.com/ktZSBxlgfE

Furthermore, since the story went viral, Delta Airlines has reached out to Brett and offered to fly Martin to Hawaii for free.

In an article for the Atlanta Journal-Constitution, Brett posted Delta’s official statement: “Mr. Martin, you’ve touched many lives, helping connect those on your mail route to their families and friends through the letters you delivered.

“We too are all about connections; on behalf of Delta employees, enjoy your trip to Hawaii—we can’t think of a better way to kick off your retirement. Cheers.”

Floyd lives in Atlanta with his dog Gigi. It'll be a little weird to just receive mail and not deliver it anymore. "I'm just going to smile," he said. He doesn't have children, just the 500 houses worth of kids he spends 6+ hours with every day. He hopes to go to Hawaii one day. pic.twitter.com/W0RHdRvzgj

There is not yet a set deadline for Martin’s trip to Hawaii, but the GoFundMe page organizers say that they will be sure to keep everyone updated.

“Once Floyd decides when he will visit Hawaii, we promise to share photos of his trip,” says the organizers. “Until then, we leave you with this quote from Mr. Floyd, “‘Continue to take care of each another, and smile when you think of me.’”

(WATCH Martin’s block party goodbye in the video below)