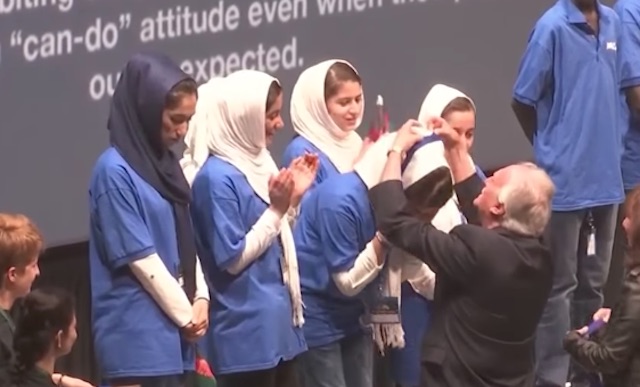 These Afghan girls who were twice denied visas to the United States were just given silver medals in recognition of their perseverance and cultural triumph.

The high school students were competing in the First Global Challenge – a robotics competition based out of Washington D.C.

Despite not being from any of the states that are currently subjected to travel bans, the girls had their visas rejected by the Department of Homeland Security. If they had not been granted access, they simply would have watched their robot compete via Skype.

CHECK OUT: Afghan Girls, Not Allowed On Bikes, Shred On Skateboards Instead

According to media sources, however, White House staff intervened at the last minute and encouraged Homeland Security to grant the six teens parole.

Then, on Tuesday during the final scoring and award ceremony, the First Global judges awarded the girls silver medals for “courageous achievement” and “their can-do attitude”.

“I am so excited, and very, very happy,” Ghaderyan told The New York Times. “I still can’t believe this happened.”