Home All News Kids 107 Teens Awarded for Launching Their Own Projects to Save Oceans From... 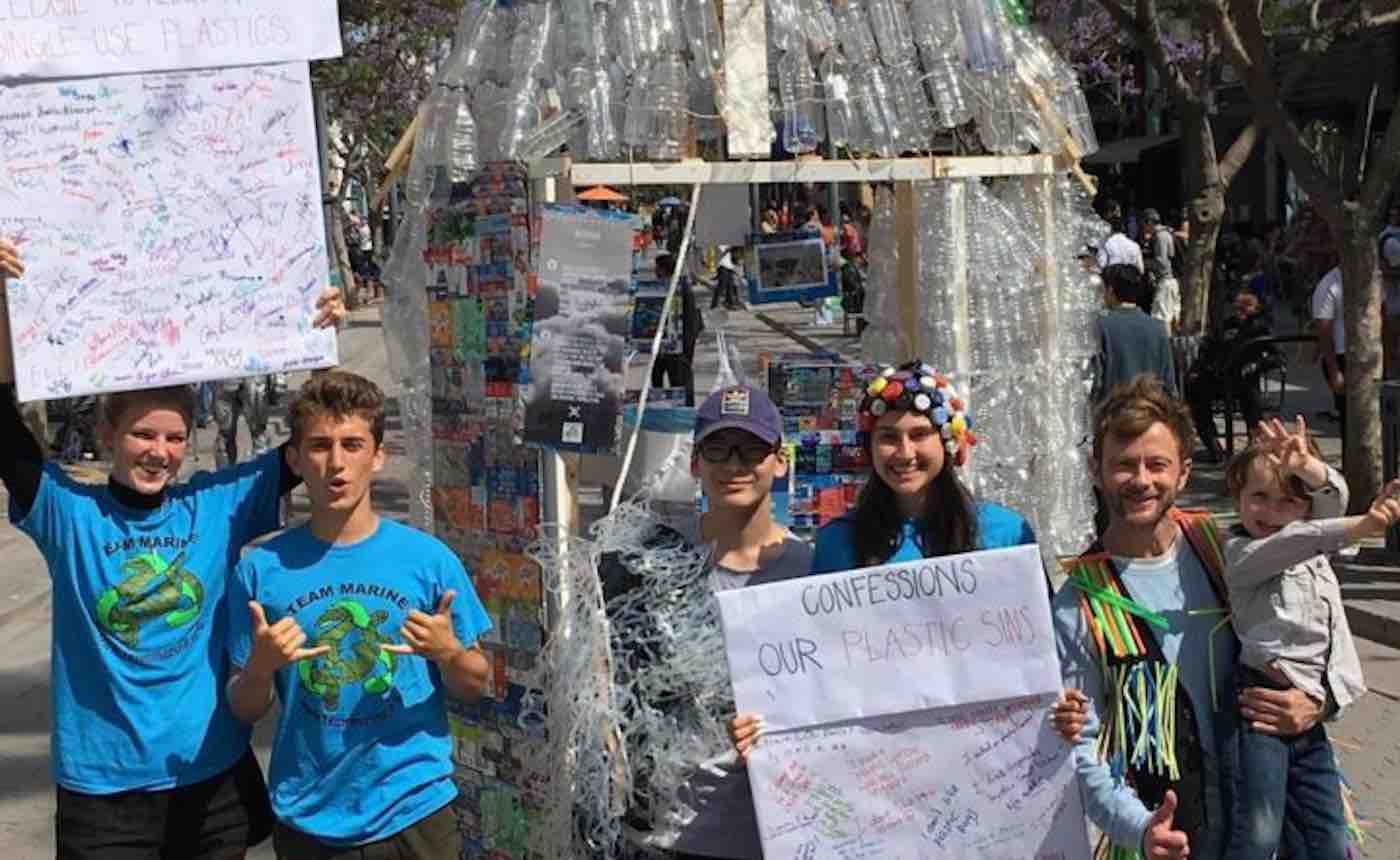 More than 250 teen activists are being hailed for launching creative campaigns to fight plastic pollution around the world—and 15 projects have been awarded prize money for their efforts.

The students working to protect the sea—and their local watersheds—hailed from the U.S., Australia, Canada, India, Nigeria, Pitcairn, Vietnam, and elsewhere.

Team Marine, an environmental club from Santa Monica High School in California, won the Competition’s Gold award and a $5,000 prize. As part of their comprehensive top-down, bottom-up campaign, Team Marine educated 800 high school freshmen about plastic pollution and successfully lobbied the school district to pass a sustainability plan that ensures support for integrating environmental literacy and stewardship into the school curriculum.

Team Marine’s campaign culminated in a giant public art installation—made out of 600 plastic water bottles—that provided a platform for the group to educate more than 400 community members about marine debris and alternatives to single-use plastics.

“We are now even more committed to improving environmental awareness because we saw the impact our actions can have,” said Team Marine member Siri Storstein-Norgaard.

“From the mom who came back to our booth to show us her purchase of a metal straw to the six-year-old who was disgusted by the video we showed of plastic flowing into the ocean—we saw the difference we were making.”

One of two Silver prize winners was Plastic Free MV, a group of students who helped make their community “the first in North America to ban the sale of both single-use plastic water and soda bottles”.

Residents of idyllic Martha’s Vineyard, in Massachusetts, the middle schoolers of Plastic Free MV understand that the ocean is the backbone of their fishing and tourist island home. But after doing several beach clean-ups, they recognized that marine debris is an increasing threat. Therefore, they wrote a bylaw to ban the sale and distribution of single-use plastic water and soda bottles and got it included on the town dockets of three neighboring communities—then went to work convincing residents to vote in their favor.

The group held five public forums to present their campaign, spoke at town meetings, and met with local politicians and business owners. To help alleviate business owners’ concerns, the students partnered with local organizations like the Vineyard Conservation Society to distribute information, add refill stations, and find solutions, such as alternative materials and distributors.

Other competition participants also realize that living sustainably means not creating trash in the first place—so they educated their peers and community members about an emerging “R” in waste management—“refuse”—and provided solutions and resources to support a waste-free lifestyle.

In addition to making tangible impacts in their schools, communities, and local watersheds, students reported that participating in the competition strengthened their personal environmental attitudes and behaviors—and their belief that they can make a difference by influencing others to refuse single-use plastic items and increase recycling.

“Water connects us all—whether we live in island nations, landlocked communities, or coastal cities—and marine debris is a global, borderless problem that requires a large-scale effort,” said Linda Cabot, founder and president of Bow Seat. “We are so impressed by the creative, sophisticated, and impactful campaigns. These projects reflect the leadership of today’s youth, who are directing incredible social movements to advocate for the changes they want to see in their communities and for their futures.”

“Having the opportunity to review the entries was so inspiring and uplifting,” said Competition guest judge Doorae Shin, chapter coordinator of Surfrider Foundation O’ahu. “I loved being able to be reminded of all the hope there is out there.”

Bow Seat’s Marine Debris Creative Advocacy Competition was launched in 2016 with a two-year grant from the National Oceanic and Atmospheric Administration (NOAA) Marine Debris Program, which supports projects that use outreach and education to inspire people to reduce and prevent marine debris.