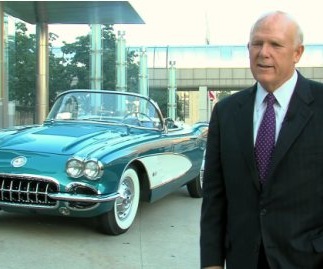 Just 510 Chevy Corvettes painted in the the Royal Turquoise hue were manufactured in 1958 and it was Dan Akerson’s childhood dream to own one.

Today Akerson is the Chairman and CEO of General Motors — which owns Chevrolet, still the maker of the Corvette. On Friday the CEO placed his beloved mint 1958 turquoise convertible on the auction block so he could give all the proceeds to Detroit’s Habitat for Humanity.

When the gavel came down in Scotsdale, Arizona, the car brought a final price of $270,000.

Not only did the NASCAR team owner and Chevrolet dealer Rick Hendrick give a new home to the sporty blue car, his winning bid will also help rehab an important urban neighborhood in need of care near Detroit’s Renaissance Center.

(WATCH the event video below)