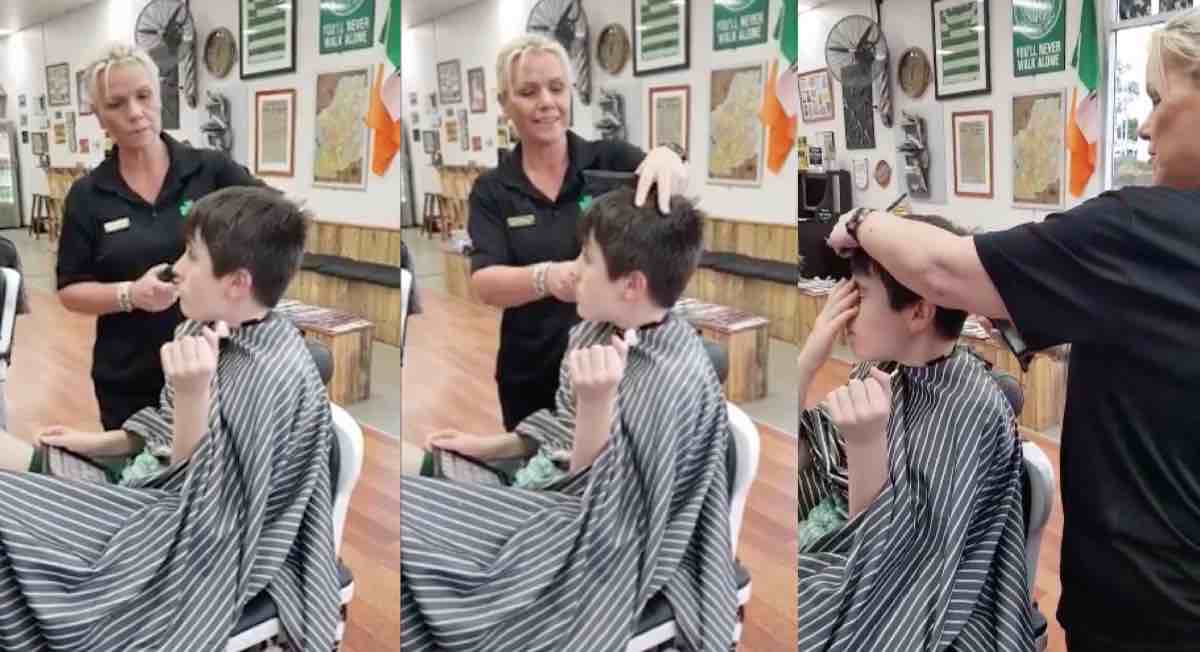 Lisa Ann McKenzie has spent the last two years trying to cut the hair of a 10-year-old boy with autism – and not only has her most recent breakthrough resulted in a successful haircut for the boy, but it has also led dozens of other special needs kids to her chair as well.

McKenzie first met Jordie Rowlands when she was working at a barbershop in Northlakes, Australia. Jordie’s parents had brought in the youngster for a haircut and he was to be McKenzie’s first ever nonverbal client in the course of her 30-year career.

Unfortunately, it was a total disaster.

The experience was too frightening for the youngster, and even though McKenzie diligently followed Jordie around the shop and lie on the ground with him, she was only able to get a few snips in before he became too agitated.

CHECK OUT: Plane Passengers Are Left “In Awe” of Woman’s Kindness Towards Agitated Boy With Autism

“I felt that I’d failed, and it made me want to do better,” McKenzie told the Washington Post. “It made me want to learn more about autism so I could connect with him and take away his fear.”

Determined to succeed, McKenzie asked Jordie’s parents to bring the youngster in to the shop every two weeks at closing time. She also refused to charge them any money for her attempted services.

Despite trying dozens of different methods, however, McKenzie was still unable to cute Jordie’s hair. She even tried cutting the boy’s hair at home, but to no avail.

MORE: Store Finds the Cutest Way for Autistic Boy to Keep Himself Busy in the Aisles

To make matters more frustrating, the owner of the barbershop found out about Jordie’s appointments and disciplined McKenzie for cutting a client’s hair after hours.

“Working for a chain barber, you have to be robots with everything black and white [and] no grey areas!!” McKenzie wrote on Facebook. “I quit shortly after without any plans for my future.”

After leaving the store in Northlakes, she opened her own shop called the Celtic Barber Rothwell Central.

Jordie continued making regular visits to her shop – and then a few weeks ago, McKenzie had a breakthrough with the youngster: she started singing “The Wheels On The Bus”.

“I didn’t know he was into nursery rhymes, I was just trying to calm him,” she told The Post. “He looked at me like mesmerized. I had him. That was it.”

After two years of perseverance, McKenzie was finally able to give Jordie a full haircut.

“Tears were rolling down my face. His mom was crying, his dad was crying, all of us,” she said.

LOOK: 5-Year-Old Has ‘Meltdown’ On Train Ride But Mom Snaps Photo When Stranger Sits Down With Him

“Jordie now walks in holding my hand and sits in the chair with a gown on. We get through the cut our own special way and he now manages a full haircut and we can style it. Amazingly, he now interacts with me and I even get a hug at the end!” McKenzie wrote on Facebook.

After posting a video of her success on Facebook, news of her abilities spread around town and she now has 100 special needs customers. In order to accommodate her new clients, McKenzie has trained her four other barbers on how to properly work with them as well.

The shop also sets aside one Sunday out of the month for autism-friendly appointments only.

“The Celtic Barber family is very proud to be an autistic-friendly barber and to think outside the box!” she says.