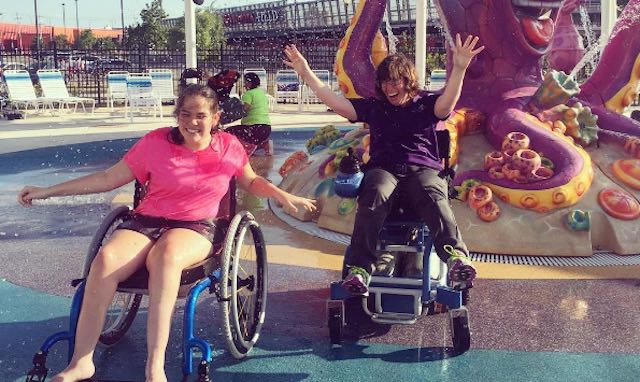 America’s first ultra-accessible waterpark has just opened its doors to the public on Saturday.

The $17 million San Antonio waterpark, Morgan’s Inspiration Island, has dozens of features that make it the most handicap-accessible park in the country.

The park, which is a nonprofit organization, offers special passes to kids who have trouble waiting in lines; the water temperature can be adjusted for guests who have sensory issues; the water is constantly filtered and reused for kids with immune issues (and for the environment); all of the rides are wheelchair accessible; and every visitor with disabilities is given free admission.

Children who have a tendency to wander are given waterproof wristbands with GPS so parents and staff can easily locate the youngsters in the park, if necessary.

In order to prevent overcrowding, admission to the park is also limited. Parents are encouraged to purchase tickets online in order to guarantee attendance.

The most impressive addition to the waterpark, however, are the waterproof wheelchairs available for rent – also totally free of charge.

The 80-pound wheelchairs, which were designed by researchers at the University of Pittsburgh, is powered and charged by the air, rather than a battery. This way, users can wander through the splash pads and water cannons unfettered by their heavier electric counterparts.

Additionally, one third of the waterpark’s employees have disabilities, in order to encourage representation.

Inspiration Island is an extension of the $35 million next-door theme park Morgan’s Wonderland. The park was created in 2010 by Gordon Hartman, whose 23-year-old daughter with disabilities became the namesake of the facilities.

In order to create Inspiration Island, Morgan and Gordon consulted dozens of physical therapists, doctors, caregivers, and families with disabilities. Now that the park has opened, it can be accessed by the 54 million children diagnosed with disabilities nationwide.

“Morgan’s Inspiration Island will concentrate on inclusion, and inspire guests to do things previously thought not to be in their range of capabilities,” said Hartman. “Those without disabilities and those with, including individuals in wheelchairs, guests with hearing and visual impairments, and even guests on ventilators, will be able to play alongside each other and gain a greater appreciation of one another.”