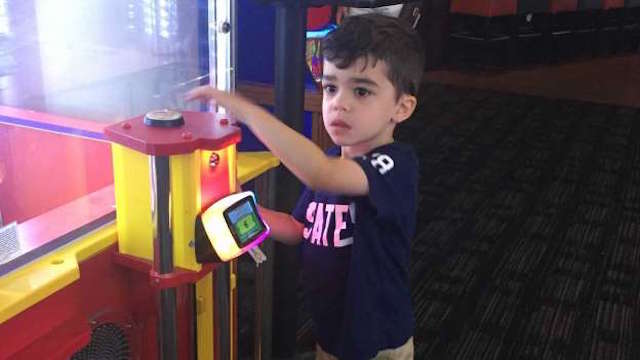 When her 4-year-old autistic son became overwhelmed by the crowds at the local arcade, this mom was resigned to the fact that her kids might not be able to enjoy the games like everyone else.

But the arcade staff wasn’t about to let anyone miss out on the fun.

Stephanie Saad’s son Jordan is nonverbal, but he adores playing the video games at the Dave and Buster’s in Boston, Massachusetts. After attempting to go on a normal afternoon, however, the large amounts of people made him too anxious to enjoy the facilities.

CHECK OUT: Barber Goes Extra Mile For Boy With Autism, Cuts Hair in the Car

Stephanie then sent an email to the event coordinator and asked what times were the least busy for the arcade, so Jordan and his twin sister wouldn’t have to worry about the crowds.

Much to the mother’s surprise, she received an email from the staff saying that they would be happy to open the arcade earlier so the siblings could enjoy the games alone.

True to their word, Dave and Busters opened the store on the morning of June 22nd just for the Saad family. In addition to allowing other family relatives to attend, the staff gave $15 gift cards to the siblings and set several of the machines to unlimited play mode.

“I cried watching both of my children being able to have fun, laugh and actually stay someplace that they both were having so much fun at,” wrote Jordan’s mother on Wicked Local. “As hard as it is for Jordan to miss out on things, I know it is equally as hard for his sister who also has to leave when things are overwhelming.”

“I think it is so important that everyone know how truly amazing the Dave and Busters staff are and also, what an impact they made on my special little guy,” she added.