Home Most Popular “Be Inspired” Week on Good Morning America 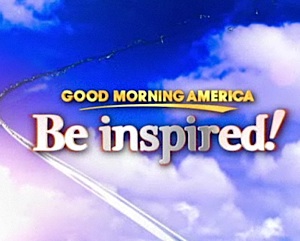 We all know people who inspire us with their brains, creativity, compassion and drive — people who make a difference by changing lives and even saving lives. Beginning today, Good Morning America anchors Robin Roberts, George Stephanopoulos, Sam Champion, Juju Chang and Bill Weir will share stories of remarkable people who inspire them.

“Be Inspired” week runs May 17- May 21 on GMA, and will also feature inspirational stories from such celebrities as Michael J. Fox, Chris Rock, Vanessa Williams, Alyssa Milano, and Rosie ODonnell.

Today, Sam starts off the series by turning to his family. He has always looked up to his older sister Teresa, but especially 17 years ago, when Teresa put her promising legal career on hold to not only raise a son diagnosed with Autism, but to help other families with Autistic children. Whether raising money for therapeutic programs early on when Autism was not so prevalent, to running support groups out of her home helping other parents cope with the challenges of an Autistic child, to lobbying a change in public policy and spearheading legislation for Autistic children and their families, Sam said his big sister has selflessly committed to a cause, putting her own needs aside to help others. (WATCH the video below, or read the story here)

On Tuesday, May 18, Robin Roberts travels to Chicago to introduce GMA viewers to the Urban Prep Academy all-boys charter high school and the man who created a unique learning atmosphere to push students to heights once deemed impossible: An entire senior class graduating and being accepted to college is a remarkable feat for any high school. That feat is especially inspiring if the senior class is from an all-boys high school on the South Side of Chicago, where crime is at an all-time high and 60% of the boys in public schools there will not even graduate. Against all odds, all 107 seniors are not only graduating, but they are all attending four-year colleges starting this fall. (Click to see the story) 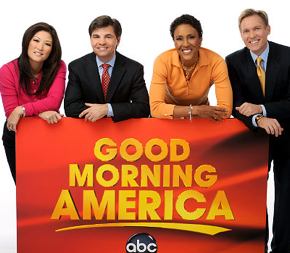 On Wednesday, May 19, George Stephanopoulos introduces us to Loring Henderson, who has been his inspiration ever since the early 1980s when George was a Washington, D.C., intern. At the time, he was working for advocacy and policy organizations in D.C., and he introduced George to volunteerism at a local soup kitchen. Since then, Loring has dedicated his life to helping others in need. As the Executive Director of the Lawrence Community Shelter in Lawrence, Kansas, his goal is to not only provide a safe shelter for the homeless, but also a program that provides a path to a positive future. (Click to see the story)

On Thursday, May 20, Juju Chang recalls that while reading a book about historical figures to one of her sons, she came across the story of Wilma Rudolph, the first woman to win three gold medals in a single Olympics in track and field events (Rome, 1960). This was extraordinary considering that her parents were told she would likely never be able to walk properly because of a bout with childhood polio. Against all odds, she went on to become the fastest woman in the world. Juju travels to Tennessee State to talk to Rudolph’s former track coach Ed Temple, as well as the current coach of the women’s track and field team Chandra Cheeseborough-Guice (mentored by Wilma) about the inspirational runner, who has since become a favorite of Juju and her son.

On Friday, May 21, Weekend anchor Bill Weir tells the story of Ed Stafford, who for 770 days has been walking the length of the Amazon River in South America — from Caman on the Pacific coast of Peru to the mouth of the river on the Atlantic coast of Brazil. In the world’s first expedition of its kind, his journey is designed to draw worldwide attention to the complexities of the Amazon rainforest. Weir joins Ed on his harrowing journey, which he hopes to complete in August.