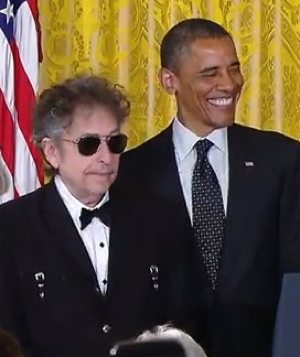 At the White House yesterday, President Obama honored this year’s recipients of the Presidential Medal of Freedom, the Nation’s highest civilian honor.

“I have to say, just looking around the room, this is a packed house, which is a testament to how cool this group is,” chuckled the President, whose broadest grin came as he bestowed the award upon the shoulders of Bob Dylan.

“Together, these honorees have moved us with their words; they have inspired us with their actions. Some of them are household names; others have labored quietly out of the public eye. Most of them may never fully appreciate the difference they’ve made or the influence that they’ve had, but that’s where our job comes in. It’s our job to help let them know how extraordinary their impact has been on our lives. And so today we present this amazing group with one more accolade for a life well led, and that’s the Presidential Medal of Freedom.”

Here are some highlights of the ceremony: (Watch the inspiring presentation below)

Madeleine Albright
“As the first woman to serve as America’s top diplomat, Madeleine’s courage and toughness helped bring peace to the Balkans and paved the way for progress in some of the most unstable corners of the world. As an immigrant herself — the granddaughter of Holocaust victims who fled her native Czechoslovakia as a child — this is one of my favorite stories: Once, at a naturalization ceremony, an Ethiopian man came up to her and said, ‘Only in America can a refugee meet the Secretary of State.’  And she replied, ‘Only in America can a refugee become the Secretary of State.'”

John Doar
“It was a scorching hot day in 1963, and Mississippi was on the verge of a massacre. The funeral procession for Medgar Evers had just disbanded, and a group of marchers was throwing rocks at a line of equally defiant and heavily-armed policemen. And suddenly, a white man in shirtsleeves, hands raised, walked towards the protestors and talked them into going home peacefully. And that man was John Doar. He was the face of the Justice Department in the South. He was proof that the federal government was listening. And over the years, John escorted James Meredith to the University of Mississippi.  He walked alongside the Selma-to-Montgomery March. He laid the groundwork for the Civil Rights Act of 1964 and the Voting Rights Act of 1965… And I think it’s fair to say that I might not be here had it not been for his work.”

Bob Dylan
“Bob Dylan started out singing other people’s songs. But, as he says, ‘There came a point where I had to write what I wanted to say, because what I wanted to say, nobody else was writing.’ So born in Hibbing, Minnesota — a town, he says, where ‘you couldn’t be a rebel — it was too cold’. Bob moved to New York at age 19. By the time he was 23, Bob’s voice, with its weight, its unique, gravelly power was redefining not just what music sounded like, but the message it carried and how it made people feel. Today, everybody from Bruce Springsteen to U2 owes Bob a debt of gratitude. There is not a bigger giant in the history of American music. And I have to say that I am a really big fan.” (Dylan continues recording and touring around the world today and has received a Pulitzer Prize Special Citation.)

William Foege
“In the 1960s, more than 2 million people died from smallpox every year. Just over a decade later, that number was zero — 2 million to zero, thanks, in part, to Dr. Bill Foege. As a young medical missionary working in Nigeria, Bill helped develop a vaccination strategy that would later be used to eliminate smallpox from the face of the Earth. And when that war was won, he moved on to other diseases, always trying to figure out what works.”

Gordon Hirabayashi (stood against Japanese internment)
“Gordon Hirabayashi knew what it was like to stand alone. As a student at the University of Washington, Gordon was one of only three Japanese Americans to defy the executive order that forced thousands of families to leave their homes, their jobs, and their civil rights behind and move to internment camps during World War II. He took his case all the way to the Supreme Court, and he lost.  And it would be another 40 years before that decision was reversed, giving Asian Americans everywhere a small measure of justice. In Gordon’s words, ‘It takes a crisis to tell us that unless citizens are willing to standup for the [Constitution], it’s not worth the paper it’s written on.’ And this country is better off because of citizens like him who are willing to stand up.”

Jan Karski
“Jan (who is fluent in four languages and possessed of a photographic memory) served as a courier for the Polish resistance during the darkest days of World War II. Before one trip across enemy lines, resistance fighters told him that Jews were being murdered on a massive scale, and smuggled him into the Warsaw Ghetto and a (Nazi) death camp to see for himself. Jan took that information to President Franklin Roosevelt, giving one of the first accounts of the Holocaust and imploring to the world to take action.”

Juliette Gordon Low (Founder of the Girl Scouts)
“Growing up in Georgia in the late 1800s, Juliette was not exactly typical. She flew airplanes. She went swimming. She experimented with electricity for fun. And she recognized early on that in order to keep up with the changing times, women would have to be prepared. So at age 52, after meeting the founder of the Boy Scouts in England, Juliette came home and called her cousin and said, “I’ve got something for the girls of Savannah, and all of America, and all the world. And we’re going to start it tonight!” A century later, almost 60 million Girl Scouts have gained leadership skills and self-confidence through the organization that she founded. And from the very beginning, they have also included girls of different races and faiths and abilities.”